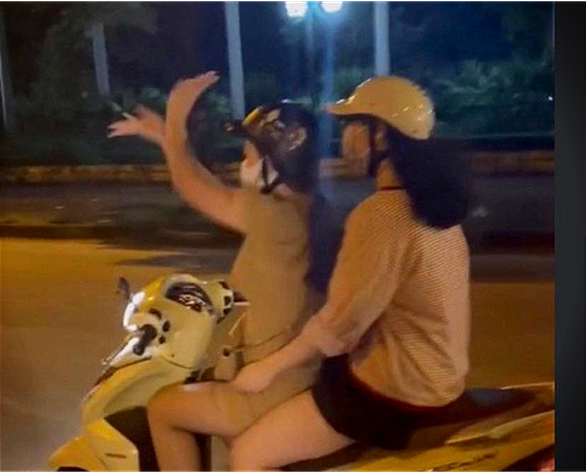 A screenshot is captured from a video which shows a woman taking her hands off the handlebars to perform a hand fan dance while riding her motorbike in Hanoi, Vietnam. Photo: Bac Tu Liem Police

A young woman has been fined for taking her hands off the handlebars of her motorbike to perform a hand fan dance while riding on a street in Hanoi.

D.T.H., a 23-year-old woman from the north-central province of Nghe An, was required to pay a VND8.8 million (US$386) fine over such a lawbreaking act, the local Department of Public Security cited a decision issued by police in Bac Tu Liem District on Monday.

Earlier, local police had received a video of a young woman letting go of both hands while riding a motorbike on a street in front of Hoa Binh Park in Bac Tu Liem District, Hanoi.

She was carrying another woman but did the hand fan dance at the same time.

A traffic police team of Bac Tu Liem District was then sent to verify the video.

On April 5, police officers questioned H. and she admitted her violations.

Police officers fined H. for taking both hands off handlebars while riding a motorbike and having no driver’s license.

Pursuant to current regulations, motorbike riders will be fined VND6-8 million ($263-351) each if they take both their hands off the handlebars of motorbikes while riding the vehicles.

In addition, their driver’s licenses will be revoked for two to four months.

If violators repeat the offense, their driver’s licenses will be withdrawn for three to five months and their vehicles will be confiscated.

Furthermore, they will be fined VND1-2 million ($44-88) each for having no driver’s licenses.

Hand fan dance, in which dancers move their hands quickly and flexibly like dancing with fans, is a trend among the youth in Hanoi.

While many people think the dance is offensive, many others feel excited and try to learn to do it.