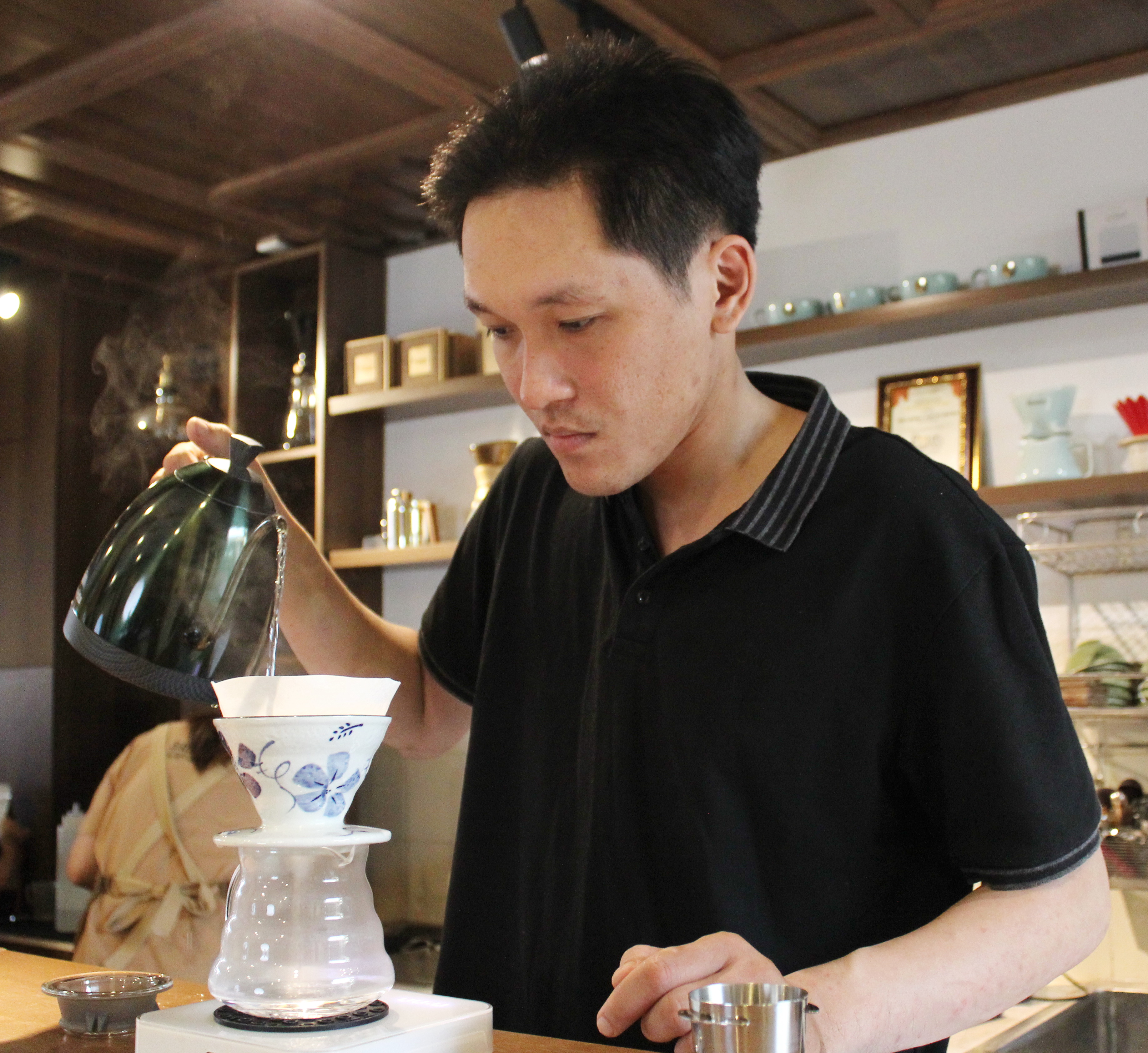 Dang The Lan has a powerful passion for coffee. He provides training courses for baristas. Photo: Q.L. / Tuoi Tre

Dang The Lan, a Vietnamese overseas student in Australia, came back with a passion for coffee. He provides training courses in barista skills and hopes to create a professional community for baristas in Vietnam.

The passion for coffee

Lan left for Australia at the age of 20 to pursue a major in computer and information technology.

Despite his graduation with distinction, the man switched to an entirely irrelevant business – being a barista.

It is a long story starting from his part time work.

During his early months in the land of the Kangaroo, Lan worked as a waiter at a Vietnamese restaurant.

The owner allowed him to make use of the coffee machine available there to practice his barista skills.

Lan looked up tutorial video clips on the Internet, purchased the ingredients with his own money, and conjured up his own drinks.

Over time, his confidence in the job grew. With much practice and experience from the time in Vietnam when he was working for a famous coffee shop, Lan applied to work as a barista for a coffee bar in Australia.

His first three attempts at three different places failed. Lan did not make it past the probation.

Yet, he learnt a great deal about the style of Australian coffee business, which was different from the Vietnamese way.

His fourth application was successful.

The world of coffee opened up. He earned good money only by working at weekends, which also did not interfere with his study.

“Being a barista was so appealing at that time. It took me from one discovery to the next,” said Lan.

“I got a new perspective and got to know a lot more about coffee. The more I studied it, the more exciting it became.”

“My passion grew. I fell in love with the job and was deeply involved.”

Passing down the flame

After three years of college and two years doing a part time job, Lan decided to come back to Vietnam.

He worked in the research and development section of a famed coffee company.

He used to test hundreds of different coffee recipes within a day, so much that it got him dizzy and vomiting.

At that time, coffee fans were discussing a lot about clean coffee, espresso and roast coffee.

Later, he set up his own coffee business.

Coffee is the predominant drink at his place, alongside others like tea and herbal drinks made from local ingredients.

Customers have the choice of the regular coffee taste, but Lan offers coffee with different aromas like strawberry, pineapple and apple.

The ingredients for these are imported from overseas at high costs.

At the same time, Lan is passing his flames to his followers. Dozens of young people have signed up for his barista training program.

Most of these people are getting ready to move to Australia for either educational or work purposes.

Lan offers a basic course of ten sessions, and an advanced program of 20 sessions, in which learners can get all the tips it takes to successfully apply for a job at a coffee shop in Australia.

This is based on Lan’s knowledge and experience in Australia.

Other learners simply love the art of the barista and would like to open up their own shops.

To Quyen, one of Lan’s employees, said: “It is impressive to hear Lan talk about the discoveries he made with coffee.”

“He is quite a tough guy to please and rather strict at work, but the atmosphere here is cozy and friendly. We feel like a family, not like a boss and staff members.”

Lan’s father, Dang Vinh Luom, was surprised at his son’s career switch considering his major in computer. He was, however, not doubtful of Lan’s choice.

Once Lan asked for his father’s feedback on his coffee, to which Luom said: “It’s fine, but I don’t like it.”

The young man laughed at that comment, saying his father does not fall in his target customer group, so it was understandable that the old man did not enjoy the drink.

“I trust him because he knew which road he was going and how he should be going on it. I have no intervention in his decision, but I silently observe his every step,” Luom said.

“I believe that the job has chosen the right person.”

A dream for a professional playing field

The term barista is widely acknowledged in the world, but in Vietnam this job has not been properly defined.

Highly skilled baristas are few and far between in this Southeast Asian country.

Due to such erratic appreciation of the value they can bring, their earnings vary greatly, causing financial insecurity.

Based on the regular training courses that Lan offer, it can be seen that quite a number of young people are interested in this line of work.

A barista contest was held by Lan and others in April 2021, attracting a lot of young participants.

They were about to host another contest in Danang City and Hanoi when the COVID-19 pandemic caused their plan to collapse.

“We are getting ready to relaunch that project. If everything goes well, it will be held in April in Hanoi and then in Danang,” said Lan.

“We hope to see the best baristas gather together in a contest in Ho Chi Minh City.”

“My biggest dream is to form an association of baristas in Vietnam, a body that can host professional events for in-service baristas. What can be better than that?”