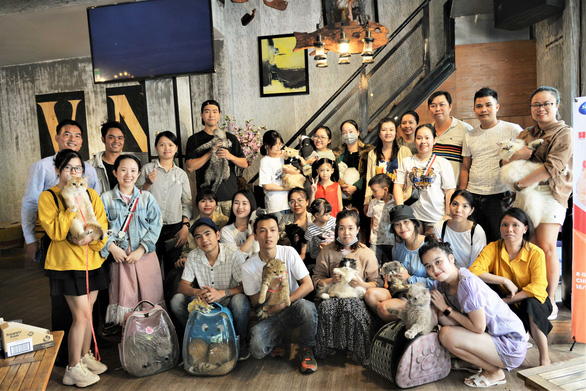 Keeping a foreign cat has become a trend among young Vietnamese animal lovers. Many are willing to spend a generous sum for the ownership of the pleasantly looking and cuddly animals.

“Ever since I got this cat, my love for children has grown although I am not a mother yet,” said Hoang Thao, a resident in Binh Tan District, Ho Chi Minh City.

“They are different species, but are quite similar in their innocence and naughtiness.”

According to a large number of young cat keepers, they feel less lonely during the lockdown months amid the COVID-19 pandemic in Ho Chi Minh City thanks to their feline friends.

Tieu Leo, a British Shorthair owned by Thai Viet from Thai Binh Province in the north of Vietnam, has been with his current owner for a year and a half.

In April 2020, Viet’s friend left him with this cat to study overseas. At that time, Tieu Leo was just over two months old.

“I kept a cat when I was a child, but for 10 years living in Saigon I did not,” said Viet.

“So it was a little difficult at first to have a furry member in the family. I think it was destiny, so I embarked on taking care of this cat like a family member.”

During their first days together, Viet was confused about cat care as Tieu Leo was a kitten.

To him, it felt like fathering for the first time. He had to learn a mountain of information about how to look after cats.

“After I got him, I realized the differences between Vietnamese and Western felines,” he said.

“Vietnamese cats are quite resilient and still have a lot of natural instinct in them, but these Western tabbies get sick so easily. It’s hard to care for them when they’re young.

“Things only get better when they’re older.”

Tieu Leo once suffered diarrhea and it took Viet quite some effort finding the proper food for his pet.

“I even had to learn how to make cat pâté full of nutrition. I took him for vaccinations, too,” said Viet.

“I learnt to clean his ears with proper liquids, to trim his nails and comb his fur.

“I ran around buying toilet sand for him as well.”

That is not the end of this owner’s love for the mouser. He even spends time making toys for Tieu Leo.

Currently doing freelance work, Viet acknowledges the big costs for the well-being of his pet cat.

“Besides all the basic expenses, I spend around VND500,000 [US$22] a month on his food and litter, not to mention other stuff,” he elaborated.

Viet took his cat on a plane with him back to his hometown for the Tet holiday in 2021.

To prepare for this flight, he got his fellow traveler a ticket for VND550,000 ($24), a proper cage, and a certificate for animal transport.

At the airport, Tieu Leo received proper attention and had a live animal tag on his cage. He went straight to a ‘business’ line for felines, while his owner had to queue patiently like other passengers.

Now Viet is in northern Vietnam with his dear partner, which has grown inextricably fond of its owner.

“He sleeps when I work and plays when I sleep,” the man said.

The British Shorthair has brought Viet lots of joy for the past months. He is cuddly and rather smart to pick up sign language.

The 33-year-old man funnily remarked that for those considering a marriage, they should try raising a cat because it is similar to keeping a baby.

A soulmate in lockdown months

Dang Nhu Thao Vy, a resident in District 1, Ho Chi Minh City, named her cat Meo. It is also a British Shorthair, a gift from a friend of hers.

“I am actually a dog person, but now I end up with a cat,” she revealed.

This cat has been a companion since she moved out of her parents’ place, she said, adding that she misses the feline so much when she goes to work.

“I think we share the same personalities, possibly because we are both Cancers?” she joked, indicating the zodiac month when she was born.

A meticulous person, Vy consulted many experienced pet keepers and the Internet on the best practices of cat raising.

For the past months, she has been working from home and cooking good foods for her pet.

She was careful in her recipe for pâté for cats for fear that her ‘child’ might suffer intestinal problems.

“Cooking is a sign of love for this cat. I hardly ever cooked for myself,” she said.

Meo’s owner has stored a variety of seeds and supplementary foods for the cat’s intestines, heart, eyes, and fur.

Also, Meo has her own collection of clothes and accessories.

“She is a girl cat, so I often get her dresses and necklaces. I even got her a private toilet,” she added.

“Meo has her own food tray and tons of other toys.”

To this 28-year-old cat lover, the furry member in her house has taught her patience and consideration.

“The most noticeable change in me is that I feel comfortable and happy at all times with Meo around. I am not as bad-tempered as before anymore,” said Vy.

“When I was down-spirited in the lockdown months or when I had trouble at work, Meo was doing all kinds of fun stuff. She made me happy again.”

“I live on my own in a flat, so I got a cat for a companion. I don’t think it takes too much time to care for a cat, but it keeps the house warm and makes me feel peaceful,” she said.

For the coming Tet holiday in early February, she is taking her cat to her hometown in Long An Province by motorbike.

“I don’t think I can bear the feeling of missing him if I use a pet sitting service,” she added.

The most popular foreign breeds of cats in Vietnam are British Shorthair, British Longhair, Persian, Bengal, and Exotic Shorthair.

According to Nguyen Van Loi – deputy head of the Saigon Pet Cat Group – keeping foreign cats has become a trend in Vietnam now that people’s awareness of animal well-being has increased considerably.

In particular, cat keeping has been especially popular during the months of COVID-19 lockdown in Ho Chi Minh City last year, for young unmarried owners can benefit spiritually when they are stuck at home doing sedentary work.

Most of the foreign breeds in Vietnam are not purebred, according to Loi. Pedigree cats are rare and astronomical in price, reaching at least $4,300, unaffordable to the general buyers.

Many cat breeding farms have been producing low-cost hybrids.

“Cat buyers tend to pick one that is pleasant to the eye, good-natured, and affordable. Few care about pure breeds,” he said.

“However, some affluent owners do spend a lot of money buying a cat from overseas, but only a few.”

Loi has been active in cat breeding since 2017 and currently owns a British Shorthair breeding farm in Tay Ninh Province as well as a cat pet store in Binh An Ward, Thu Duc City under Ho Chi Minh City).

For those looking for breeding and commercial uses of the cat, the price can be VND25-50 million ($1,093-2187) depending on the looks and rarity.

“But it can be cheaper for those cats that might not produce the wanted hybrids,” Loi said.