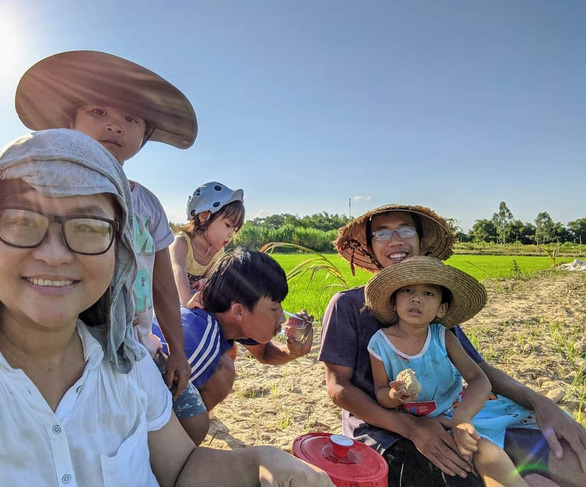 Realizing the white-collar life is not meant for her, a young woman in Vietnam stepped down from her well-paid position to foster a wave of sustainable agriculture practices in her hometown.

“My dream is to make agriproducts with market value on a par with Europe’s, which means they should achieve the same level of safety, quality, and origin transparency,” said Bui Thi Hong Thu, owner of Noom, a farm produce brand in Binh Tuy Village, Quang Nam Province.

As Thu revealed, she just made her foray into this business five years ago, when she quit her high-paying job as an interpreter and returned to her hometown in Quang Nam to realize her vision in life.

Up to that point, her professional path had been a classic upward mobility story that many parents in rural Vietnam expect their kids to follow.

Born in 1981 to a farming household in the upland district of Tien Phuoc, Thu decided to pursue a career as an interpreter and was accepted into an English major at the University of Science and Education under the University of Da Nang.

After she graduated in 2009, Thu received a lucrative job offer from Samsung, but she soon realized that the corporate world is not what she wanted — it was the unpretentious farm life in her hometown that was her true desire.

The realization prompted Thu to step down from her job and start working on joss sticks — the very first product for her brand.

Aspiring to gain market experience first-hand, the hopeful entrepreneur traveled to many foreign cities, including Taiwan’s Kaohsiung, where she noticed the stark discrepancy in packaging design and variety between Vietnamese products and their rivals on the supermarket shelves.

“I feel disheartened seeing the repetitiveness and unappealing packaging of Vietnamese products lying on a store shelf,” she said.

“I yearn for a day when domestic products are recognized for the good value they have always had.”

From then on, Thu’s business strives to diversify its product range, focusing on those that can elevate the standing of raw agricultural produce on the market, namely chemical-free incense sticks, cold-pressed peanut and sesame oil, natural soap bars, and unrefined cane sugar.

The businesswoman believes that by embracing the basics and traditional techniques instead of blindly pursuing modern approaches, her facility can achieve sustainable growth in the long term.

“I remember my sweet childhood memories being woven with the taste of homemade peanut oil made by my grandfather,” Thu said.

“If my customers get to experience such unadulterated and safe products, higher pricing would not be a problem for them.”

In order to maintain consistent quality for her products, Thu has put in the work to track down the best ingredients from the source.

After months of traveling to surrounding villages back in 2015, Thu pinpointed the arid villages of Thang Binh, Duy Xuyen, and Dai Loc Districts as the biggest producers of peanut and sesame in Quang Nam.

However, the farmers there usually sell their products raw, or minimally processed, for a low profit margin.

Seeing the dead-end situation, Thu tried to convince the smallholders to join her production chain, but she was met with indifference — until the young local leaders saw the opportunity and joined the conversation.

“I remember the leaders of Dai Thang Ward in Quang Nam spent the whole month conversing with local farmers to get them on board,” Thu recalled.

During these dialogues, Thu was also invited to explain her novel approach to permaculture, or self-sustainable farmlands that do not use chemical intervention, to farmers who have been used to monoculture practices and pesticide use for decades.

“A variety of plants will be added to a garden, turning it into a small forest that can sustain itself.

“Once the plants and microbes reach an equilibrium, the practice will help rehabilitate the soil using purely natural resources.”

According to Thu, many husbandry households showed cynicism about her initiative at first, but once the authorities found several farmers who committed and eventually found success with permaculture, the narrative soon changed to be more favorable toward hers.

Among the aspects that helped Thu earn the farmers’ trust was her transparency during work with partners.

Her firm, Noom, will collect all details of input costs and work hours from farmers in order to correctly calculate their share of the profit of the final product.

“Consumers will be informed about the origin and husbandry method, even the name of the farmer and processing worker who made their products,” she said.

“Each permaculture farm will be just as transparent to the customers as the patches of a garden in their backyards.”

After establishing a solid production chain, Thu is working to level up the supply network, bringing her products to foreign markets such as Southeast Asian countries.

She is also building the firm’s presence on social media and e-commerce platforms to reach more retail customers, as well as forging close relationships with wholesale buyers.

However, partners and customers will always hear Thu advising against buying too many products from her. Instead of marketing tactics, Thu frequently tells stories of the farmers reviving the land with permaculture efforts.

“After 11 years in the business, I have never stopped hearing complaints about the high price of my produce,” Thu admitted.

“Yet, once they’ve learned about the farming process, my customers are always pleased to place orders.”

As the participating households reported, their income was significantly boosted after they dropped chemical pesticides for permaculture practices.

Thu’s achievement has inspired many young, educated hopefuls to join her firm and contribute to a shared vision of sustainable agriculture.