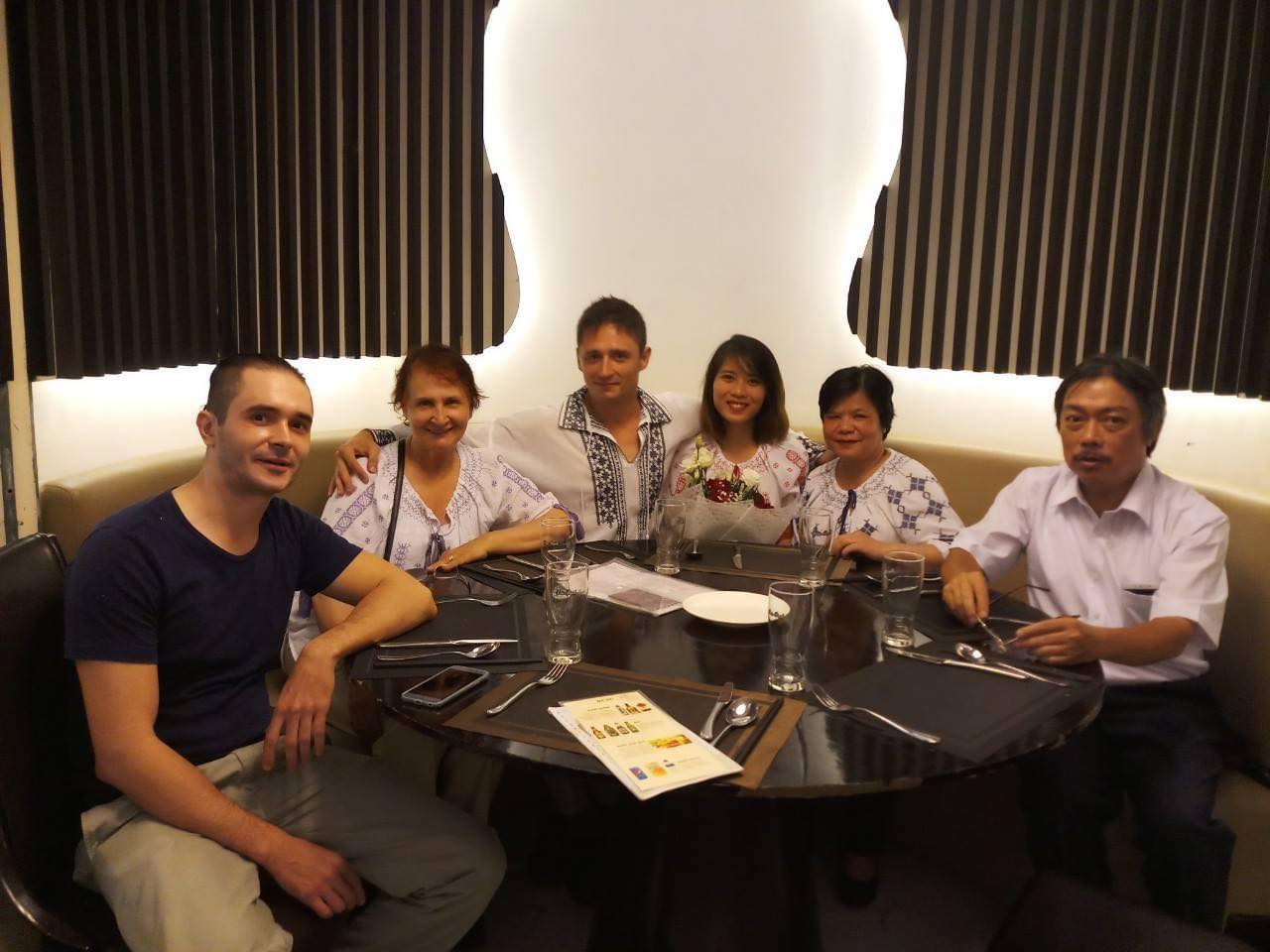 A supplied photo shows Valentin Constantinescu (third from left), his wife (third from right), and their family enjoying a meal together after the couple signed the papers to legally married in Hanoi in 2018.

Editor’s note:Valentin Constantinescu wrote to Tuoi Tre News to share his thoughts on his own wedding following our series on things that often ‘shock’ foreigners when it comes to traditional Vietnamese weddings.

The Romanian man has lived in Vietnam since 2004 and married his Vietnamese wife in 2018.

This piece has been titled, subtitled, and edited by Tuoi Tre News for clarity, consistency, and coherence.

Long story short, I met my wife in 2016 in Hanoi. About six months into our relationship, we realized we would be with each other forever.

In August 2018, we decided to sign the papers to be legally married in Vietnam. We moved to Ho Chi Minh City shortly after and planned to hold our actual wedding ceremony on September 17, 2021.

17th of September is our anniversary – it’s the day she agreed to be my girlfriend. She chose the year 2021 because it looks cool – 20 and 21 are consecutive numbers.

Unfortunately, COVID-19 completely ruined our plans – we lost a beautiful business (a pet hotel, a bistro, a lounge, and a free language center all at the same location) that we, unluckily, had started only one month before the pandemic kicked off.

We are now trying to recover and finally have our dream wedding planned next year, hopefully.

Our wedding isn’t going to be anything like a wedding in Vietnam or anywhere else, for that matter. It won’t be a large gala or anything like that, either. It will be very original.

Our wedding will be very personalized. We are not big fans of the typical same old wedding schedule, colors, festivities, dishes, and styles. Weddings in Vietnam seem very aloof to me. Yes, aloof, because they give me the impression that they are just a show for other people to know the couple is married.

I’ve been told by many of my Vietnamese friends that it is quite common for a couple to hold their wedding ceremony before signing the papers so that they can ‘sống thử’ – ‘try living with each other under the same roof’ without being socially criticized, as it is traditionally frowned upon to do so if not married. The main purpose is that if they want to ‘divorce’ then it is more similar to a normal break-up as there is no legal paperwork that needs to be filed. They avoid having to live with the legal ‘divorced’ status all their life.

So, in my eyes, these weddings are held just to scream to the world: “hey, we are married, OK?”

But even when the wedding comes after signing the official papers, each ceremony seems the exact same – the same food, the same triumphant loud music, the same red and white covers on tables and chairs, the same decorations, the same lights, the same everything!

Same words, too. The emcees even say the same words at each wedding. Literally! I have an acquaintance who has hosted dozens of weddings and he told me that all he does to prepare is write the names of the ‘happy couple’ on his hand. Everything else…he just learns by heart!

There can be a band or music is played from a device – but it doesn’t matter what, people do dance. A lot!

The weddings are also much longer. They usually start between 5:00 pm and 6:00 pm and last until around midnight, giving people enough time to get tipsy or even socially drunk. There is no such thing as a lunch wedding and the party is almost never held on a weekday because us Romanians need the extra time on weekends to ‘paaartaaayyyyy.’

We also don’t have emcees at our weddings. Instead, family members simply grab the microphone and say kind words about the couple, throughout the evening – usually once they are quite tipsy, which makes their ‘speech’ hilarious.

On the other hand…

That said, I absolutely love going to weddings in Vietnam. Weird, right? As a guest, they’re awesome. I like the abundance of food served at the beginning and then start drinking (I personally never combine food with alcohol).

I love the flashy lights and ‘fireworks,’ the smoke, the triumphant music, and how the couple and the elders in their families come by every single table and ‘cheers’ with you – it’s adorable and cozy, and I never get bored of it.

I also love that gelatinous chicken soup that literally every wedding seems to have!

The whole atmosphere is truly enjoyable. I just wish they would last longer.

The first Vietnamese wedding I’ve ever attended was in Ha Dong when it was still a countryside city on the outskirts of Hanoi. The party started in the morning and lasted until the evening. People got so drunk that they fell asleep right at the tables.

Since moving to Ho Chi Minh City, I haven’t attended many weddings, though there was one that was particularly memorable. It was held in the countryside and I was asked by my buddy, the groom, to be the interpreter since he and his family and friends were foreigners (I am on a native level of Vietnamese). Other than that, it was pretty similar to weddings in the north, lasting from morning till evening (and probably even later).

About the Vietnamese wedding ‘gifts,’ I am a pretty logical person, so I got to say that the money in the envelope thingy is absolutely and extremely convenient, as compared to the traditional wedding presents in our country, which they get sold after the wedding. Money, yes, is the best wedding present indeed, considering that the couple is traditionally starting their life journey together. So that was surprising, in a very good way.

Another major factor is the guests themselves. If they care about the bride and groom or if they are close to them, then they will come on time. If they come just for show, then they will be as late as they please.

In general, being late in Vietnam is definitely a thing, but there are no rules to it. It just happens, depending on what the event is.

I’ve heard some people talk about a ‘one-hour-late rule,’ and I believe that is complete bollocks. I believe it is just something fabricated by foreigners who don’t actually grasp Vietnamese customs and, as a consequence, come up with ‘rules’ to guide themselves throughout their time here.

So, in general, what I love about weddings in Vietnam is kind of what I love about Vietnam: pretty much everything. But when it comes to our own wedding…no way. Our wedding is for us to feel happy and for our guests to enjoy their time celebrating our happiness. Every single one of them. For that to happen, there’s need for a big amount of originality and creativity.