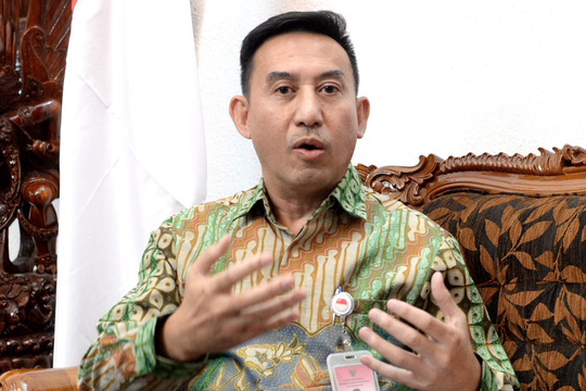 Recently, Indonesia held back-to-back meetings in preparation for the 17th G20 Heads of State and Government Summit taking place in Bali in November.

Agustaviano Sofjan, Consul General of Indonesia in Ho Chi Minh City, shared his views with Tuoi Tre News about the Indonesian presidency at G20, the group of 20 largest economies in the world, in the context of geopolitical tension.

Can you tell us about the results of Indonesian President Joko Widodo’s visit to Europe to attend the G7 meeting, as well as his visit to Ukraine and Russia recently? In Indonesia, how is this trip viewed?

President Joko Widodo was invited to the G7 summit as the president of the G20 and also as a strategic partner of the G7 in Germany (from June 26-28). Certainly, there was an important message that our president made, which is countries need to seek peace in Ukraine.

We certainly don’t want to see the war escalate. Indonesia, my president, and my foreign ministers have urged that the war must end. We have been through COVID-19 pandemic. Now, with this global political tension, this creates a setback and will only worsen the condition of the world.

The pandemic and the geopolitical tension have increased the prices of certain commodities, and energy. Ukraine is one of the countries that produces certain kinds of commodities that also impact the global supply chain. So, it was very clear that we want to find peace in Ukraine. That immediate attention needs to be taken in facing the global food and energy crisis. Basically, that was the message conveyed at the G7 summit when my president was there.

And then my president flew to Ukraine to meet President Zelensky. Perhaps, many people may not know that Indonesia’s constitution clearly states that Indonesia also contributes to world peace. So with the intention to go to Ukraine as part of this constitutional mandate, my president came to see firsthand the devastating impacts that happened to Ukraine. On that occasion, he also handled some humanitarian relief. Indonesia will also assist the reconstruction of a hospital that was badly damaged in Ukraine. And then, my president flew to Moscow where he said that we wanted peace and war needs to stop.

War does not help anybody, it causes a lot of damage and the repercussions of the social economy is so huge, not only regionally, but also globally. So that’s why, as the president of the G20, as a loving sovereign nation, we need to bring this message of peace, we need to have a dialogue. Indonesia has tried to promote peaceful dialogue in finding solutions.

During his trip, Mr. Joko Widodo urged the G7 to ensure Russia sanctions do not affect food and fertilizer to control food prices. How will this topic be discussed at the G20 ministerial meetings, such as the foreign ministers meeting?

I think the G20 foreign ministers meeting is an opportunity for the G20 members and its invited countries to have a frank open dialogue. The first session was on multilateralism because there is a need to encourage dialogue. The current situation of the world is that we are facing a deficit of trust. So, the only way to try to solve this trust deficit is dialogue in a frank manner that will open to ideas in order to find solutions.

The second topic that the ministers discussed was on food and energy security. As costs of food, energy, as well as other commodities are rising, it is important to ensure security, access and affordability. And, if countries continue to have sanctions, it does not create a conducive environment. That’s why they need to have solutions that can create an enabling environment for the world to continue to work together to find solutions, regionally and globally.

The Ukraine-Russia conflict has clouded the meetings at the G20 this month. What is Indonesia planning to help restore peace in Ukraine while the G20 president?

Nobody wants a crisis but since a crisis has happened, there is a need to find solutions. The G20 was created in times of crisis in 1999, when there was a financial crisis in Asia that affected even Indonesia. Back then, the G20 was still a forum for the finance ministers, and the central bank governors. That forum came up with solutions. And in 2008, when there was a global crisis, the G20 also came up with some resolution initiatives, then the world was able to come up with appropriate solutions.

Today, we are facing another crisis, not only the pandemic, but also the geopolitical tension related to Ukraine. Of course, the G20 must see this in the global context because the solutions that the G20 brings, does not only affect the members, but also the whole world at large.

The G20 members accumulate more than 85 percent of world GDP and 75 percent of international trade, and account for more than two thirds of the global population. So certainly, this forum has the ability to come up with solutions in trying to achieve the strategic importance, the strategic actions that it needs to take.

So, again, the G20 must find ways in order to build a more peaceful, stable and prosperous world together. That’s why Indonesia’s theme as the presidency of G20 is ‘Recover together, recover stronger.’

There are three priority issues that Indonesia has taken up for this presidency. First is the Global Health architecture. We know through the pandemic that we need to strengthen our global health architecture, globally, regionally, and nationally.

And the third one is energy transition. This is also an important and challenging topic for the world. During the last United Nations Climate Change Conference (COP26), countries all around the world, including Indonesia and Vietnam, already committed to decarbonization.

How can ASEAN and ASEAN member countries benefit from the discussions at the G20, especially during a time when Indonesia is the chair?

The G20 is an international forum focusing on policy coordination in economics and development. It represents the world’s economic and political power, with its members representing more than 80 percent of the world’s GDP, 75 percent of international trade, and over 60 percent of the global population. Indonesia listed its priority areas as “strengthening global health architecture, digital transformation, and energy transitions”, expressing hope that G20 would be able to serve as a catalyst for a strong and inclusive global recovery.

Our G20 presidency carries the spirit with the theme of “Recover together, recover stronger.” Indonesia chose this theme since the world is currently under pressure due to the COVID-19 pandemic, requiring joint and inclusive efforts in finding a way out or solutions for recovery. This spirit also can be applied to the current situation in the world where there is high tension across the world because of the Ukraine and Russia War.

ASEAN was also impacted because of this war that has caused food price inflation that affects our economy. During the G20 presidency, Indonesia has voiced its concern and also the concern of ASEAN member countries to the rest of G20 members for issues that need to be addressed and need quick action such as the food and energy crisis issue.

G20 meetings invite regional representatives, including ASEAN’s chair. Thus, for this year’s G20 meetings, Cambodia, as the chair of ASEAN in 2022, is also being invited. Indonesia’s G20 presidency brings voices to the concerns of developing countries, that the multitude crisis of the pandemic and geopolitical tensions does not create setbacks to the achievement of Sustainable Development Goals (SDGs). Thus, ASEAN in this regard, can make use of the opportunity to also voice its concern to the important issues that affected ASEAN Countries and find the solutions through dialogue.