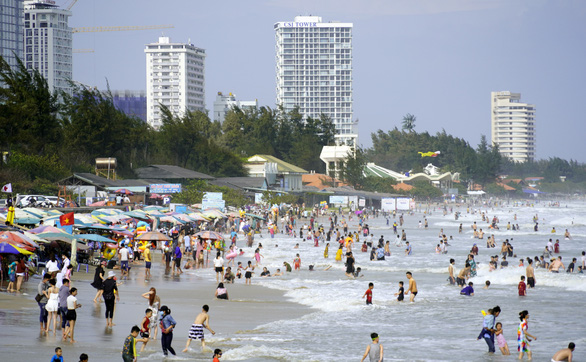 Around 50,000 visitors flocked to Vung Tau, beach city in southern Vietnam, over the weekend for the New Year holiday, which prompted local authorities to strengthen COVID-19 prevention measures.

The popular beach city saw the largest number of visitors from Saturday afternoon to noon the next day, local tourism authorities said.

Authorities assigned staff to patrol beaches and parks around the city to remind people of wearing masks and staying distanced to prevent COVID-19 spread.

Accommodation venues were required to have QR codes for customers to conduct medical declarations.

The rule was adhered to quite well by big hotels and resorts while smaller guest houses and motels seemed to neglect it.

QR codes were also provided along the beaches.

Such a large number of visitors gravitating to the city in a short time spurred the demand for local seafood as well as doubled their prices.

“We do not stock many flower crabs as well as feel hesitant to sell them to customers due to the high prices,” an owner of a seafood store on Nguyen Huu Canh Street said.