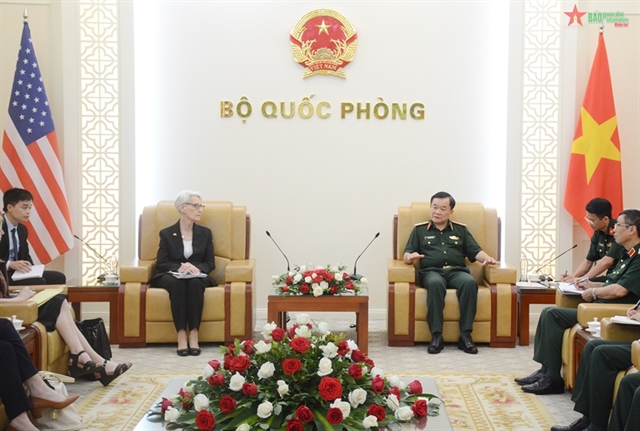 At their meeting in Hà Nội on Monday, Chiến said Việt Nam always prioritises and attaches great importance to promoting the cooperation with the US in overcoming war consequences.

He noted some positive results over recent years, including the completion of the dioxin detoxification project at Đà Nẵng airport; the continuous implementation of the the dioxin detoxification project at Biên Hòa airport; the project to improve the living conditions of people with disabilities in Việt Nam in localities seriously affected by the agent orange/dioxin; a communication project on overcoming the consequences of bomb and mine and toxic chemicals left from the wars; and the implementation of a Memorandum of Understanding about overcoming bomb and mine aftermaths.

He said he hoped that the US Department of State will continue consulting the US Congress and Government to support fields of national defence cooperation that are being implemented between the two countries with priority given to projects on overcoming war consequences, including speeding up the first phase of the dioxin detoxification project at Biên Hòa airport, continuing to mobilise resources to completely handle dioxin pollution at Biên Hòa airport; and supporting Việt Nam to improve capacity for its UN peacekeeping forces.

US Deputy Secretary of State Wendy Sherman affirmed that cooperation in overcoming war consequences is a foundation in the relations between the two countries.

She spoke highly of the fields in which the two sides have cooperated, including dioxin detoxification, bomb and mine clearance and support for people with disabilities in Việt Nam.

She said the US will continue supporting Việt Nam in training and improving capacity for the country’s UN peacekeeing forces.

At the meeting, Deputy Minister Chiến affirmed that Việt Nam always considers the US as one of the most important partners in its foreign policy.

He thanked the US for providing vaccines and COVID-19 prevention and control equipment for Việt Nam.

He appreciated that the national defence cooperation between the two countries was implemented following the Memorandum of Understanding on promoting national defence cooperation between the two countries signed in 2011 and the Joint Vision Statement on Defence Relations signed in 2015, which have gained positive results in many fields, including overcoming war consequences, dialogues, consultancy, exchanges of high-ranking delegations, training, rescue activities, medical military and UN peacekeeping operations. — VNS