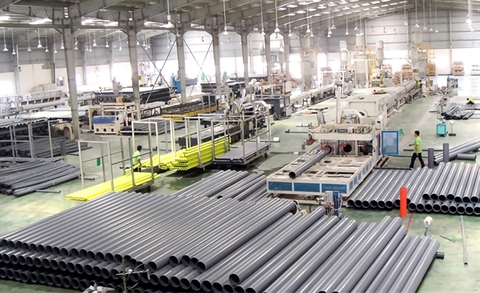 Inside a Tien Phong Plastic Joint Stock Company factory. The company expects revenue and profit in 2021 to reach VND4.8 trillion and VND460 billion, respectively. — Photo courtesy of the company

HCD attributed the profit growth to the sharp increase in oil prices and plastic resins prices, while the company stored a large amount of imported inventory at a time of low prices.

Tien Phong Plastic Joint Stock Company expects revenue and profit in 2021 to reach VND4.8 trillion and VND460 billion, respectively. The leader of this business attributed the growth to co-operation with Sekisui Group, giving the company the opportunity to supply Japanese ODA projects in Southeast Asia in the field of infrastructure.

However, a survey by VnBusiness showed that not all plastic enterprises had reported positive business results in the fourth quarter of 2021.

Da Nang Plastics Joint Stock Company (DPC) reported a loss for the first time in Q4 as its revenue reached only VND9 billion, down 26 per cent on the same period last year, while management costs increased sharply due to the relocation of the entire company into an industrial park.

This caused DPC to suffer an after-tax loss of more than VND1.2 billion in the fourth quarter, while in the same period last year, it achieved a profit of VND4 billion.

In 2021, DPC achieved a revenue of more than VND48 billion, profit after tax of nearly VND5 billion, down 27 per cent and 41 per cent respectively over the same period in 2020.

“The price of plastic raw materials has never been as high as in the first half of this year, which caused a huge impact for most of us plastic businesses,” said Nguyen Hoang Ngan, General Director of Binh Minh Plastics Joint Stock Company (BMP).

Plenty of room for growth

According to experts, the outlook for the plastic industry this year is favourable thanks to Viet Nam’s recent signing of a series of new-generation FTAs, such as CPTPP, EVFTA and RCEP.

Tran Viet Anh, General Director of Nam Thai Son Import-Export Joint Stock Company, said in early 2022 the company had continuous export orders, most notably an order of about 4,000 tonnes to the European market with a value of more than $8 million.

Son said the manufacturing industry of the US was being affected by the increasing number of COVID-19 cases. Meanwhile, China, a major supplier of plastic products to the US market, also reduced output, so orders poured into Viet Nam.

Viet Nam’s plastic industry has a lot of potential, though foreign investment in this industry in recent years has not been significant and the room for foreign investors was still very large, he said.

LEGO Group (Denmark) and Viet Nam-Singapore Industrial Park Joint Venture Company Limited (VSIP) have just signed a memorandum of understanding to build a new factory with a total investment of $1 billion. It is expected to be constructed in the second half of 2022 and start operating in 2024. According to calculations, the factory will create about 4,000 job opportunities within the next 15 years, as well as indirectly support local businesses.

Many domestic plastic enterprises have also started to invest heavily in technology to produce high-quality plastic products for domestic use and export, such as Thaco – TPC Plastic Components Production Co Ltd, a member unit of Thaco Auto Group. The company has been equipped with a system of modern equipment lines, contributing to increasing the localisation rate for domestically manufactured and assembled vehicles and at the same time promoting exports to countries like Russia and Malaysia.

Tran Viet Anh also pointed out many limitations of domestic plastic enterprises in terms of capital and raw materials.

“There should be tax and capital incentives to support plastic businesses to develop in the near future,” he said.