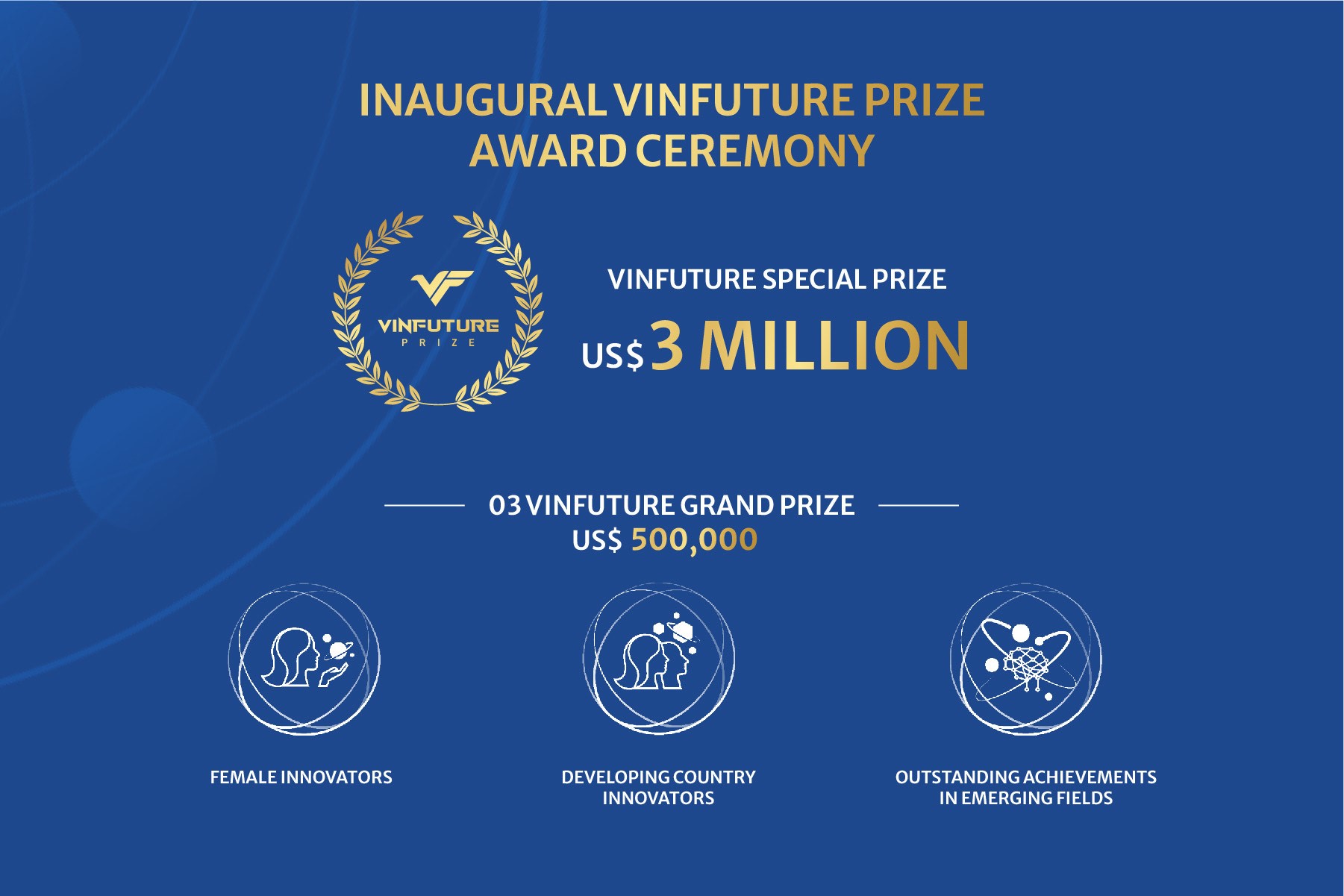 The VinFuture Foundation officially announced on Tuesday the agenda for academic events during the inaugural VinFuture Sci-Tech Week on January 18-21 in Hanoi, Vietnam.

During these international events, top scientists will arrive in the Southeast Asian country to work together for the mission of science in order to practically and effectively serve humanity.

The VinFuture Sci-Tech Week is an important event that attracts the attention of thousands of scientists, policymakers, and entrepreneurs around the world.

For the first time ever, the world-renowned influential scientists will gather in Vietnam to take part in the VinFuture Sci-Tech Week’s four main activities — namely The Conversation with the Prize Council and Pre-Screening Committee, the ‘Science for Life’ Symposium, the inaugural VinFuture Award Ceremony, and the Scientific Dialogue with the inaugural VinFuture Prize winners.

The event series begins with the Conversation with the Prize Council and Pre-screening Committee on January 18, with the participation of outstanding scientists including the Chair of the VinFuture Prize Council, Professor Sir Richard Henry Friend from the University of Cambridge, who is the 2010 Laureate of the Millennium Prize in Physics; Professor Gérard Mourou from École Polytechnique in France, who is the 2018 Nobel Prize Laureate in Physics; and several other leading scientists from the VinFuture Prize Council and Pre-Screening Committee.

At the event, they will share their passion and discuss the achievements and sacrifices made throughout their scientific pursuit.

The event aims to inspire the love for research and open up possibilities for Vietnamese scientists to approach international projects around the world.

Each of the three sessions of the symposium will last 90 minutes in length and address three critical themes: the Future of Energy, the Future of Artificial Intelligence, and the Future of Global Health.

Each session will focus on future trends as well as projections of key changes in people’s lives with the increasing intervention of science and technology.

These topics are pressing issues at the center of the scientific community’s attention, accounting for most nominations in this year’s VinFuture Awards.

With the meaningful gathering of eminent scientists, policymakers and leading entrepreneurs, the symposium will promote scientific and technical support to create new breakthroughs, contributing to improving people’s lives and realizing sustainable development for our planet and future generations.

The events are centered around the VinFuture Award Ceremony, held on the evening of January 20 at the Hanoi Opera House.

This will be a formal ceremony in the presence of Vietnamese government officials, world-leading scientists – who are recipients of prestigious scientific awards such as the Nobel Prize, the Millennium Technology Prize, and the Turing Award.

Following the ceremony will be an outstanding performance exclusively created for the event, featuring John Legend and Dang Thai Son – two international music stars who have won various coveted awards.

The award ceremony will be streamed live on Vietnamese national television channel VTV and international platforms for science and technology.

The closing event of the Sci-Tech Week is the Scientific Dialogue with the inaugural VinFuture Prize Laureates, which will take place on the morning of January 21 at VinUniversity in Hanoi.

This event serves to inspire the public with the first generation of VinFuture Prize Laureates’ sharing about their lives, their motivations, and their research journeys to the successful creation of their award-winning inventions.

Along with the main events, the inaugural VinFuture Sci-Tech Week will also include a series of exciting academic workshops, exhibitions, public lectures, and others, expected to attract the participation of scientists and the general public.

The Sci-Tech Week and VinFuture Award Ceremony, scheduled to take place annually, are expected to contribute to positioning Vietnam as a new destination for global science and technology, while creating the foundation for the multilateral connection between Vietnam’s scientific and technological community and the world’s.

VinFuture expects to tap into new opportunities for the intellectual connections between scientists, policymakers and entrepreneurs, promoting healthy commercialization, and suggesting new research ideas with high applicability, so as to fulfill the foundation’s mission of serving humanity.

The VinFuture Foundation is an independent and non-profit organization in Vietnam founded by billionaire Pham Nhat Vuong and his wife on International Solidarity Day, December 20, 2020, with a vision and mission of catalyzing meaningful changes in the everyday lives of millions of people.

Its core activity is awarding the annual VinFuture Prize for breakthrough scientific and technological innovations that have made or have the potential to create meaningful changes in people’s lives.

A total of four prizes are awarded by the VinFuture Foundation every year, consisting of the VinFuture Grand Prize valued at US$3 million – one of the largest annual prizes globally ever.

In addition, the foundation will conduct many activities to accomplish its mission, such as funding research projects, collaborating in academic development, and promoting STEM education.

I/ TIMELINE OF THE VINFUTURE SCI-TECH WEEK

1. Conversation with the Prize Council and Pre-screening Committee

1. Conversation with Members of the VinFuture Prize Council and Pre-Screening Committee on January 18, 2022

– Professor Sir Richard Henry Friend from University of Cambridge, United Kingdom, 2010 Laureate of the Millennium Technology Prize in Physics for his work on plastic electronics, one of the world’s most influential physicists, knighted for ‘Services to Physics’ in 2003 by the Queen of England

– Professor Gérard Mourou from École Polytechnique, Palaiseau, France, 2018 Nobel Laureate in Physics for his work on generating ultrashort high-intensity laser pulses without destroying the amplifying material, one of the leading scientists in electrical engineering and lasers in the world

– Other members of the VinFuture Prize Council and Pre-Screening Committee

* ‘Future of Energy’: The session will discuss the most critical alternative energy sources of the future and how to make energy cleaner, cheaper, and accessible to the vast majority of people around the world.

– Professor Antonio Facchetti – Professor of Chemistry at Northwestern University, and Chief Technology Officer at Flexterra, owner of over 160 patents and author of over 430 academic papers. He is one of the scientists with special ability to bring innovations into practical business and applications, and energy production.

– Professor Nguyen Thuc Quyen – Director of the Center for Polymers and Organic Solids (CPOS) at the University of California, Santa Barbara (UCSB). She is among the Top 1% Most Cited Researchers in Materials Science by Clarivate Analytics and Thomson Reuters in 2015 – 2018.

– Professor Sir Konstantin (Kostya) S. Novoselov – University of Manchester, 2010 Nobel Laureate in Physics for his breakthrough experiment in the super-material of graphene. He is one of the world’s most influential and most-cited scientists and well known for being one of the youngest Nobel Physics Laureates.

* ‘Future of Artificial Intelligence’: The session will discuss the impact of AI on people’s lives, how to create a competitive advantage, close the gap between countries as well as potential risks or moral issues, which need to be considered.

– Professor Albert P. Pisano – Dean of the Jacobs School of Engineering at the University of California San Diego, Member of the National Academy of Engineering (United States). He is the co-inventor of over 20 patents and co-author of over 300 archival publications in microelectromechanical systems (MEMS).

– Professor Vu Ha Van – Professor of Mathematics at Yale University, United States, Scientific Director of VinBigData. He is the pioneer scientist in researching and developing high-tech products. He received the Polya Prize from the Society of Applied and Industrial Mathematics.

– Dr. Bui Hai Hung – Founding Director of VinAI. He is an expert in machine learning and artificial intelligence, owner of 10 patents, with nearly 100 works published in popular IT & AI journals. Prior to joining VinAI, he had held important positions at Google DeepMind, Adobe Research, AI Center, and SRI International.

* ‘Future of Health’: The session will discuss the advancement of medicine in life, the responsibilities of different stakeholders in the healthcare sector, and especially the most critical issues surrounding humanity’s battle against the COVID-19 pandemic and the coronavirus variants.

– Professor Katalin Kariko – Senior Vice President of BioNTech. She is well known for her contribution in mRNA technology and mRNA COVID-19 vaccines. She has received the Princess of Asturias Award, the Vilcek Prize for Excellence in Biotechnology, the Breakthrough Prize in Life Sciences, and Lewis S. Rosenstiel Award for Distinguished Work in Basic Medical Research.

– Professor Quarraisha Abdool Karim – Associate Scientific Director of the Centre for the AIDS Programme of Research in South Africa (CAPRISA), Vice President of the African Academy of Sciences, Chair of the South African National AIDS Council Prevention Technical Task Team. She is particularly famous for her work in AIDS research, with her inventions of topical gels to reduce HIV transmission among young women and girls in Africa. She received the L’Oréal-UNESCO Award for Women in Science for her success in helping African women fight against HIV and improve their lives.

– Professor Drew Weissman – Director of Vaccine Research, Infectious Diseases Division at Perelman School of Medicine, University of Pennsylvania. He is a pioneer in the field of Immunology, best known for his basic scientific research to develop safe vaccines for various diseases. He has been honored with the Princess of Asturias Award, Breakthrough Prize in Life Sciences, Lewis S. Rosenstiel Award, Lasker-DeBakey Clinical Medical Research Award, Louisa Gross Horwitz Award, and Special Achievement Award of the National Institutes of Health (United States).

– Professor Robert C. Green – Founding Director of Brigham Preventive Genomics Clinic, Harvard University. He is one of the 25 most influential scientists worldwide in precision medicine.