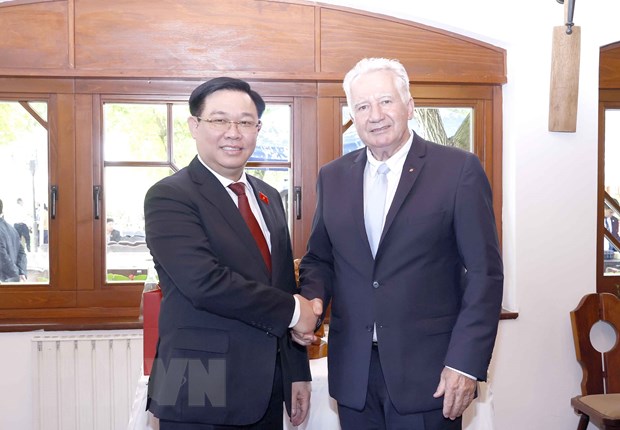 Vietnam’s National Assembly Chairman Vuong Dinh Hue visited Albertirsa City on Sunday, where he had talks with Deputy Speaker of the Hungarian parliament István Jakab, concentrating on agricultural cooperation, as part of his ongoing visit to Hungary.

In his meeting with Deputy Speaker Jakab, Hue thanked him for spending time accompanying the Vietnamese delegation’s visit to Albertirsa and a processing factory of Mirelite Mirsa Co. Ltd., an outstanding local enterprise in clean and green agriculture.

The host and guest affirmed that the two sides should focus on promoting cooperation in agriculture, especially when Hungary has strengths in such fields as cultivation, processing, marketing, and distribution.

They agreed that there remains ample room for the two countries’ cooperation, and shared the belief that Hue’s visit will certainly contribute to promoting the Vietnam-Hungary bilateral comprehensive partnership, in which the ties between the two parliaments are a significant pillar.

Given the long-standing cooperation and friendship between the two countries, Hungary is ready to continue sharing its development experience with Vietnam, despite fluctuations in the world and regional situations, Jakab said.

While visiting the factory of Mirelite Mirsa, which processes deep frozen fruits, vegetables, and pastry products, Chairman Hue stressed that agriculture and rural development are among the strategic issues for Vietnam.

Despite accounting for just 12 percent of Vietnam’s economy, agriculture is a pillar of the national economy, Hue told his host.

The country exported more than US$48.5 billion worth of agricultural products last year, but the value added of Vietnamese farm produce remained low because of the low rate of processing, he said.

The official said the Party and state always consider overseas Vietnamese communities as an integral part of the nation and an important factor to foster Vietnam’s cooperation and friendship with other countries.

He also met with representatives from the Vietnamese entrepreneur community in Budapest and affirmed that Europe-based Vietnamese enterprises play an important role in marketing and distributing Vietnamese goods to foreign markets.

It is committed to providing soft loans of 440 million euros ($464 million) for Vietnam to implement projects that are given priority by both countries.

In addition, the European country has granted 200 scholarships to Vietnamese students every year since 2018.