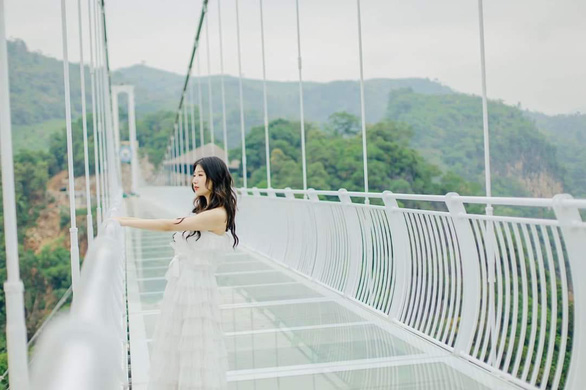 About one month after its grand opening, a glass-bottomed bridge in mountainous Son La Province, northwestern Vietnam has been declared the world’s longest glass bridge by Guinness World Records.

Construction on the Bach Long Walkway started in early 2021 and the project cost a total of VND773 billion (US$33 million).

It was put into operation in the province’s Moc Chau District on April 29 this year.

The glass-floored bridge spans a lush green jungle valley. At its highest, it is about 150 meters above the ground.

At the foot of the bridge sits Muong Mooc Cave, also known as Chim Than (God Bird) Cave, which features natural stalactites and stone sculptures.

The bridge is 2.4 meters wide and has two 30-meter towers.

Its floor was made of super tempered glass imported from France and the suspension cables were shipped from South Korea.

The bridge can safely accommodate thousands of people at a time, but the operator limits the number to just 500 for safety purposes, Tour 26 Moc Chau said.

This is the third glass bridge in Vietnam after the Tinh Yeu (Love) glass bridge, also in Moc Chau, and Rong May (Cloud Dragon) in Lai Chau Province.