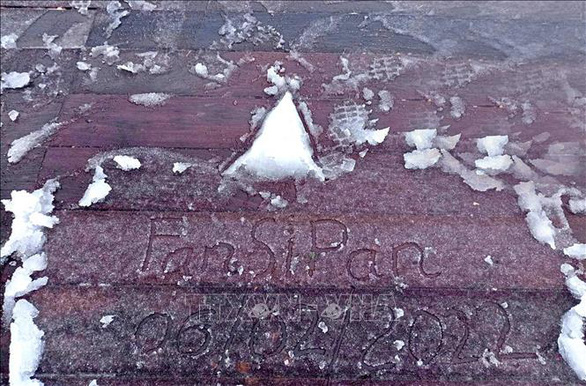 Light rain and snow covered Mount Fansipan in Sa Pa, a town in northern Vietnam, on Sunday and early Monday morning as temperatures were under zero degrees Celsius.

On early Sunday morning, slight rain and snow hit the top of Fansipan for about 10 minutes due to the effect of a southbound cold wave, according to Luu Minh Hai, director of the Hydro-Meteorological Station in Lao Cai Province, which administers Sa Pa.

Temperatures dropped to some 10 degrees Celsius in many parts of Sa Pa and below zero on the highest mount of Indochina, causing light rain and hoarfrost to cling onto roofs and trees in many high-altitude areas.

The precipitation of both rain and snow at the same time made the snowflakes partially melted and soft, Hai said.

Tourists had a rare opportunity to enjoy the breathtaking scenery on the snow-covered mountaintop, said staff working at the Fansipan cable car station.

The provincial Hydro-Meteorological Station forecast that frost will keep occurring on Fansipan as temperatures continue to drop sharply.

Locals in the mountainous areas are advised to apply special measures in protecting crops and livestock from extreme weather conditions such as hail, strong wind, hoarfrost, and fog.