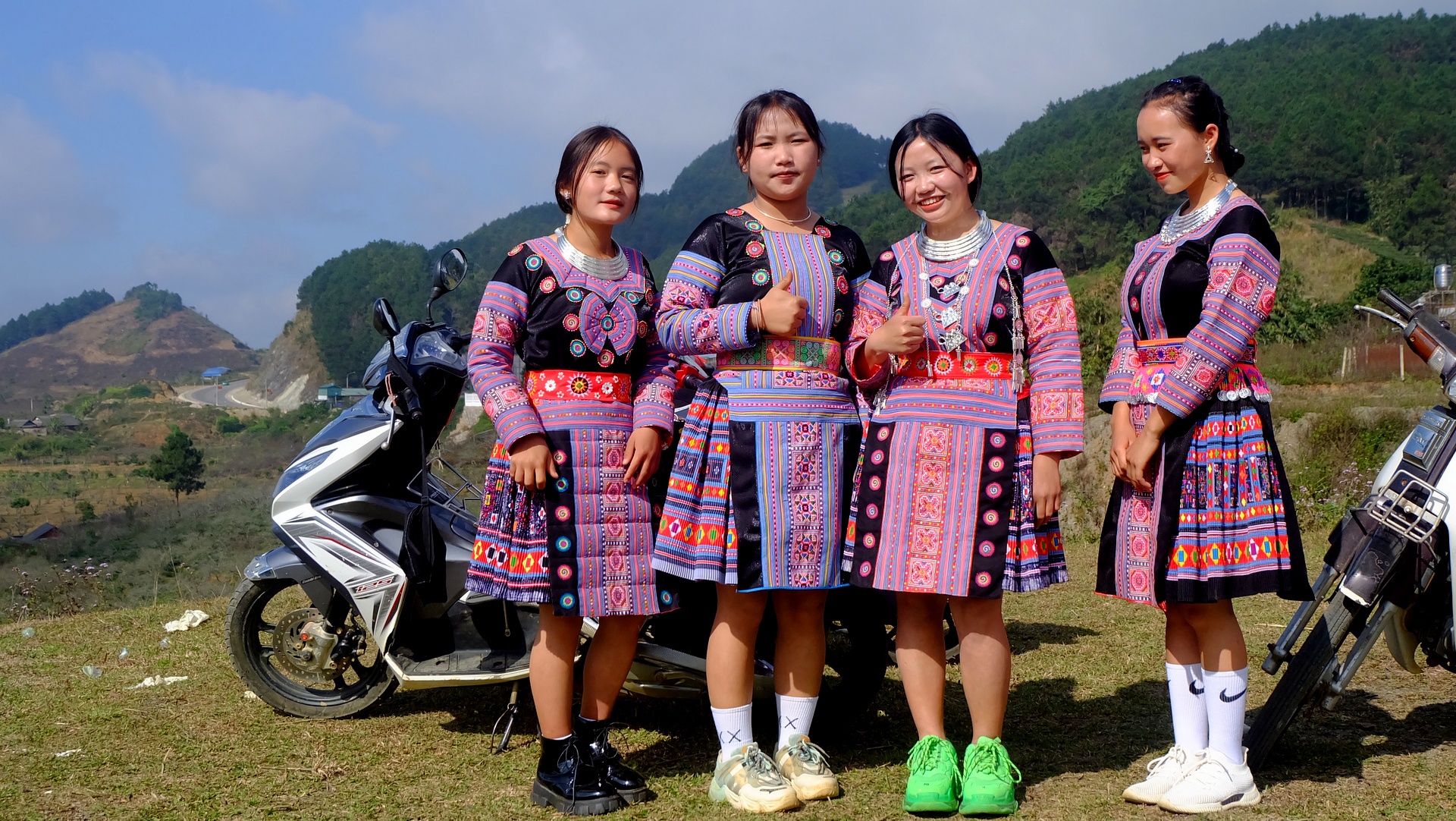 In the mountains of northern Vietnam, people of the Mong ethnic group are busy readying themselves for their traditional Lunar New Year holiday, which is celebrated in January, ahead of Vietnam’s Tet holiday.

To prepare for the new lunar year, the Mong people indulge in feasts of fresh meat and corn wine.

According to the Mong calendar, the 12th lunar month is the ‘month of the tiger,’ which signals the beginning of the harvest season and a fast-approaching end to the year.

Spreading good luck around the home

The Mong people begin preparing for their Lunar New Year celebration during the 11th month in the lunar calendar, known to them as ‘the month of the cow.’

Once the 11th month hits, all business in Mong communities comes to a halt and families begin cleaning their houses to be ready for the upcoming year.

A major part of this tradition involves replacing traditional tokens of good luck hung up during the previous Lunar New Year holiday with newly-made good luck stickers to begin the new year afresh.

The Mong not only hang these tokens of good fortune on their entrance door, but also on their most prized possessions, including their animals, rice processing machines, hoes, and motorbikes.

This tradition is how the Mong people express their appreciation toward their possessions for helping them over the past year.

Once the Mong have finished adorning their homes and tools with tokens of good luck, they begin to prepare for their year-end feasts by slaughtering cows, pigs, and chickens.

No matter how badly-off a family is, they find a way to get their hands on at least a few cuts of meat to offer to their ancestors, the gods, and the ghosts of the mountains.

Once a household butchers an animal, the leader of that household places a pile of votive papers on the offering’s forehead and sets it alight.

“This is to help our ancestors, the gods, and the ghosts recognize that these offerings are for the holiday,” said Trang A Tu, a witch doctor in Mong Hua Tat Village, Van Ho District, Son La Province.

The signature dish during the Mong’s Lunar New Year season is banh day – a soft circular rice cake which symbolizes the sky.

Banh day is made from smoothly grounded traditional sticky rice. The process of making banh day is a tradition in itself, with the rice cakes truly coming to life as families chat and work together over their preparation.

Each banh day can last for several days before hardening. When guests visit, Mong families quickly bake the banh day on a coal stove to create a slightly burnt outer layers.

The steam and smell of the cakes fill the home. Then the family and guests enjoy the cake with a sweet, sugary sauce.

Dining by a fireplace

During holiday seasons, large pieces of pork coated in yellow fat hang over the tips of their wood-burning stoves.

Charred grilled intestines are a staple of the Mong’s Lunar New Year food thanks to their sweet, rich, and exotic flavor.

They are a perfect match for the Mong people’s traditional corn wine.

A kitchen full of pork is a symbol of self-sufficiency and generosity, according to Mong tradition.

In every household, meat is proudly displayed, be it on an altar as an offering for ancestors or in the kitchen as a feast for visitors.

Such generosity is likened to the thriving apricot, plum, and peach trees that litter Mong villages and produce beautiful tiny flows for birds and bees to feed on.

Lunar New Year ancestral offerings are often accompanied by the recitation of old poems meant to invite the spirts of the deceased to enjoy the holiday, thank them for keeping the family safe and sound for the past year, and request protection for the coming year.

After reciting a poem, the leader of the household calls out the names of dead family members from the last five or six generations. For each name he calls, a bit of sticky rice and a piece of meat are placed on a large, round serving tray.

Once he is finished, homeless ghosts from the mountains are invited to join in on the celebration.

Only then does a booze-filled party featuring copious amounts of corn wine begin.

After a heavy drinking spree on New Year’s Eve, the Mong people stay home with their family members and relatives during the first day of Tet holiday.

For several days after, they feast alongside friends, family, and neighbors. For every house they visit, they linger for plenty of alcohol, meat, banh day, and salad.

To most Mong people, the highlight of the holiday is being reunited with friends and family who have been away from home for a long time. When food is served at these gatherings, it is never on plates. Rather, guests are treated to their meals on banana leaves.

Meat is always arranged by type, with steamed pork, pig’s head, and steamed chicken on different holders. Every serving tray contains the same amount and types of meat.

During meals, each guest sits with a tiny glass meant for sipping on wine. Meanwhile, two larger glasses are filled by the elders at the feast, who give their blessings, gulp down each glass, refill them, and pass them on to the next in line.

The glasses then proceeded to travel around the room until everyone has had a turn. Then, the rotation begins again.

Sightseeing in the mountains

The Mong people love spending the holiday season sightseeing. They often seek out patches of grass where they can rest together and take in the surrounding flowers, mountains, and sun.

They stand out on the green grass like the blossoming flowers of the forest. The boys are like helicoptering bees.

Due to the COVID-19 pandemic and the social distancing policy mandated by the Vietnamese government, the Mong people have been discouraged from carrying out their traditional holiday activities.

But despite the absence of singing, dancing, and nem con – their favorite ethnic ball game, they are still excited to spend the holiday together.