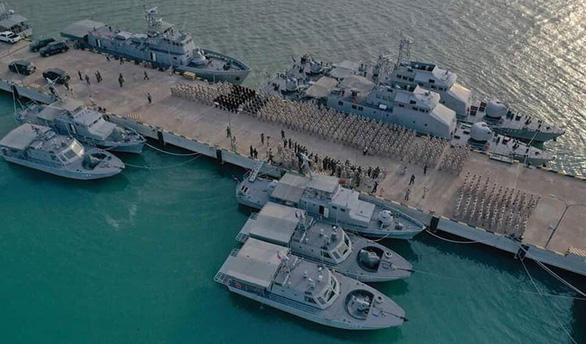 Part of the Ream naval base in Cambodia’s Sihanoukville is seen from above. Photo: Khmer Times

Cooperative relations between countries should be aimed at contributing to the peace and securityof the region and the world, the Vietnamese Ministry of Foreign Affairs’ spokesperson said at a press conference in Hanoi on Thursday.

The spokesperson, Le Thi Thu Hang, was asked by reporters about Vietnam’s response to a project launched by Cambodia and China to renovate the Ream naval base in Sihanoukville, a coastal Cambodian city.

“At the same time, cooperation between countries needs to make positive contributions to peace, security, stability, and prosperity in the region and the world.”

As non-refundable aid granted by China to Cambodia, the project kicked off on Thursday, one day after the groundbreaking ceremony, according to Cambodia’s Khmer Times.

The project aims to renovate and expand buildings on the base, upgrade warships, build wharfs, and improve repair docks and a military-civilian hospital there.

“As the Ream naval base is small, we need to upgrade it to protect our nation, territory, and sovereignty,” Cambodian Minister of National Defense, General Tea Banh, said on Wednesday.

The project to modernize the base is an important strategy for the development of the Royal Cambodian Armed Forces, in line with the White Paper published by the Cambodian Ministry of National Defense, the minister was quoted as saying.

China-related activities at the Ream base have always attracted international media attention.

Earlier this week, Washington Post, citing its own sources, revealed that Beijing was building a secret base for its military in Ream.

Phnom Penh has denied the report, emphasizing that Cambodia stands firm on its stance not to let any foreign country station troops on its territory.

This was not the first time Cambodia had spoken out about rumors related to Chinese activities in the country.

Phnom Penh once invited international journalists to visit the Ream base in order to prove that no Chinese troops were stationed here.

China is one of Cambodia’s top investors, with a major focus on infrastructure projects.

In 2021, despite the COVID-19 pandemic, Chinese investment in Cambodia surged more than 67 percent from a year earlier, according to data released by the Cambodia Development Council in March 2022.