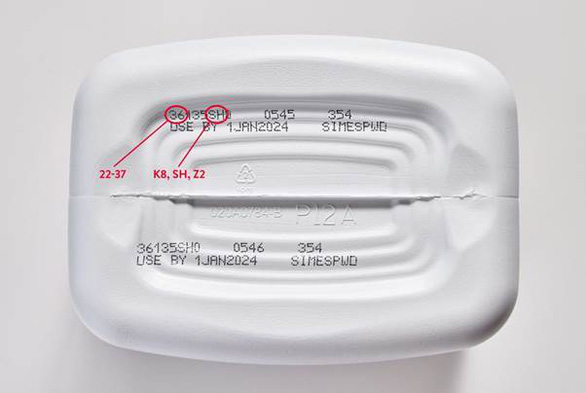 Vietnam’s food safety authorities have warned that some Abbott powdered infant formulas imported from the U.S. to Vietnam potentially contain the dangerous bacteria Cronobacter sakazakii and Salmonella Newport, and requested a recall of them from the market.

The warning was released after the Vietnam Food Safety Authority (VFA) under the Vietnamese Ministry of Health was notified by the International Food Safety Authorities Network (INFOSAN) on Sunday that four American infants have been infected with the two strains of bacteria after consuming powdered infant formulas produced by Abbott Nutrition in the U.S.

One of them has died and the manufacturer initiated a voluntary recall of three potentially affected products including Similac, Alimentum, and EleCare manufactured in an Abbott Nutrition facility in Sturgis, Michigan, the INFOSAN said.

These products have been exported to Vietnam and the potentially affected products have a code on the container beginning with the first two digits of 22 through 37 and also containing K8, SH or Z2, the producer said, noting they have an expiration date of April 1, 2022, or later.

Upon receipt of the information from INFOSAN, the VFA immediately requested the importers of such powdered infant formulas to urgently recall them from the Vietnamese market.

The VFA recommended that consumers not use these identified products and immediately notify local authorities when detecting any of them on the market.

It said updated information related to the case will be posted on its website when available.

In a press release on Thursday, the U.S. Food and Drug Administration (FDA) said it was investigating complaints of four infant illnesses from three states, and advised consumers not to use the products subject to the recall.

“All four cases related to these complaints were hospitalized and Cronobacter may have contributed to a death in one case,” the agency stated.

The FDA said an onsite inspection has been conducted at the facility and that “findings to date include several positive Cronobacter results from environmental samples taken by the FDA and adverse inspectional observations by the FDA investigators.”

An internal report of the firm also indicated environmental contamination with Cronobacter sakazakii and the facility’s destruction of products containing Cronobacter, the FDA said.

Cronobacter bacteria can cause severe, life-threatening sepsis or meningitis, whose symptoms may include poor feeding, irritability, temperature changes, jaundice, grunting breaths, and abnormal movements, according to the FDA.

Cronobacter infection may also cause bowel damage and may spread through the blood to other parts of the body.

Meanwhile, salmonella is a group of bacteria that can cause gastrointestinal illness and fever called salmonellosis, which leads to diarrhea, fever, and abdominal cramps in most infection cases, the FDA warned.

In severe cases of salmonellosis, patients may have high fever, aches, headaches, lethargy, a rash, blood in the urine or stool, and it may become fatal in some circumstances.