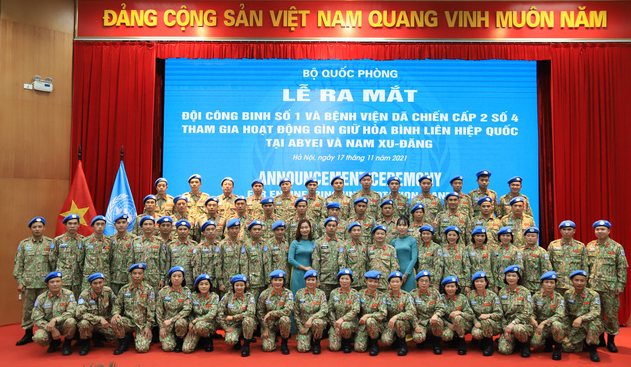 Vietnam’s first sapper unit for United Nations peacekeeping operations, along with level-2 field hospital No. 4, made its debut during a ceremony in Hanoi on Wednesday morning.

The country’s sapper unit No. 1 was established in 2014 and charged with a suitable peacekeeping mission at the request of the UN.

The unit will be sent to the UN Interim Security Force for Abyei, Major General Hoang Kim Phung, director of the Vietnam Department of Peacekeeping Operations, said at the ceremony.

It originally had 268 members, but the number has been reduced to 203, including 21 female sappers.

Along with level-2 field hospital No. 4, the unit will play a role in providing humanitarian aid, helping UN peacekeeping missions complete their tasks, contributing to peacekeeping and national reconstruction, and bringing a peaceful and stable life to host countries.

Seventy-one members of the field hospital have been focusing on English and professional training this year.

They will participate in training courses on healthcare, peacekeeping, and other military aspects in the coming time.

Chien urged the expedition of legal preparedness and signing of a memorandum of understanding with the UN on the deployment of the sapper unit in Abyei.