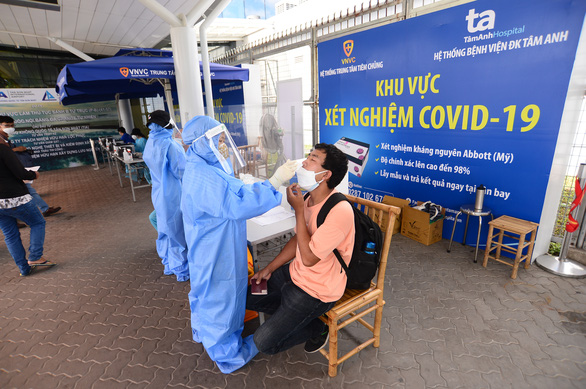 The first patient carrying the Omicron variant of the coronavirus in Vietnam has been released from hospital after two weeks of treatment, the Hanoi-based 108 Military Central Hospital reported.

After being monitored for 14 days without showing any COVID-19 symptoms, the patient, H.M., was discharged on Sunday in normal health conditions following a negative test result, the hospital said the same day.

The man returned to Hanoi on a flight from the UK on December 19 and was found positive for COVID-19 through a rapid test performed at Noi Bai International Airport.

After being hospitalized, he underwent a real-time RT-PCR test and the result returned positive.

Health experts conducted genome sequencing on M. on December 20 and suspected that the man was carrying the Omicron variant.

After one verification step taken the following day, doctors and scientists officially confirmed that M. was infected with the strain.

The man had been treated in a separate quarantine area to ensure no transmission to others, doctors said.

After his discharge, the hospital has closely coordinated with his family to continue monitoring his health conditions at home.

Following Hanoi, central Quang Nam Province was the second locality affected by the new variant with 14 infections announced on December 30.

Like the case in Hanoi, these patients, returning from the U.S. and South Korea, had no COVID-19 symptoms and were in normal health, the provincial health authorities said.

Twelve of the cases are being quarantined and cared for at hotels while the two others are being monitored at a hospital.

Ho Chi Minh City came third with five arrivals from abroad that were initially found positive for the strain but later retested negative.

These arrivals, including a Turkish woman and four Vietnamese, entered Vietnam through the southern city’s Tan Son Nhat International Airport on flights from December 21 to 25.

The five had their nasal swabs collected for testing on December 26 before the results came back positive for the Omicron variant on December 31, as their genome sequencing had been conducted by the Ho Chi Minh City Pasteur Institute, the department said.

They retested negative for the mutant on Saturday, the department said, adding that their health conditions were stable.

First reported to the World Health Organization (WHO) by South Africa on September 24, the Omicron mutant, a.k.a. the B.1.1.529 variant, was designated by WHO as a variant of concern two days later.

The variant, which health experts stated appears to be more contagious but less virulent than previous strains, has now been reported by over 110 countries and territories, according to WHO.

Health workers have administered more than 152.2 million vaccine doses since vaccination was rolled out nationwide on March 8, and 90.4 percent of the country’s adult population had received two vaccine shots by January 1, the ministry said.

The agency has called on all localities to make more efforts to complete the coverage of second vaccine doses for children aged 12 to 17 in January.