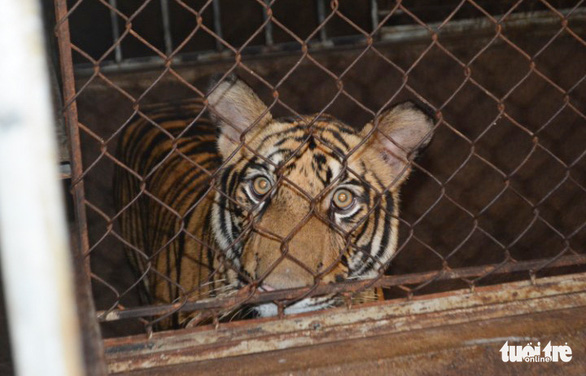 This image shows an adult tiger being raised illegally in a cage in the home of Nguyen Thi Dinh in Yen Thanh District, Nghe An Province, Vietnam, August 4, 2021. Photo: Doan Hoa / Tuoi Tre

A Vietnam court has sentenced a woman to 30 months in prison for unlawfully breeding three tigers at home.

The People’s Court in north-central Nghe An Province on Saturday gave the jail term to 51-year-old Nguyen Thi Dinh on charges of violating regulations on the management and protection of endangered, rare animals, as prescribed in the Vietnamese Penal Code, a source from the Education of Nature Vietnam (ENV) confirmed.

Dinh had previously bought the three tigers when they were cubs from Laos and raised them in her house, located in the province’s Yen Thanh District, until her law-breaking act was uncovered last year.

On August 4, 2021, local police raided Dinh’s home and detected three adult tigers, weighing from 225 to 265 kilograms, being kept in cages in the basement.

Hien, also a resident in Yen Thanh, was caught illegally keeping 14 tigers, weighing nearly 200 kilograms each, at his home also on August 4, 2021.

Nine among the 17 tigers seized from Dinh and Hien have so far died of unknown causes, whereas Nghe An authorities have transferred the remaining eight to a zoo in Ba Dinh District, Hanoi.

Illegal tiger farming has been taking place for a long time in Nghe An, mainly in the three districts of Dien Chau, Yen Thanh, and Quynh Luu, according to ENV.

Tigers and many other wild animals are strictly banned from being traded in, imported to or exported from Vietnam as they are on the list of endangered wildlife protected by the Convention on International Trade in Endangered Species of Wild Fauna and Flora (CITES), to which the country has been party since 1994.

Transporting, trading, capturing or killing wild animals or parts thereof is a criminal offense in Vietnam punishable by between six months and 12 years in prison, according to the Penal Code.

As some people believe that tiger-derived products can cure bone and joint illnesses, tigers are in demand in Vietnam for their meat, bones, and skin.