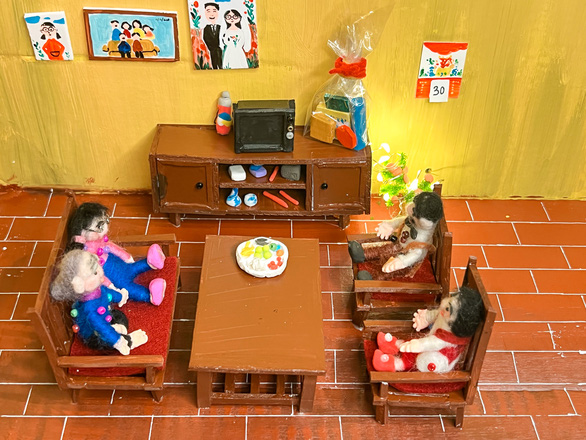 A content creator from northern Vietnam has become a hit on social media after creating a Lunar New Year (Tet)-centric cartoon using clay and wool models of traditional dishes, culture, and activities often seen during the traditional holiday.

Le Linh Chi, a Hanoi resident, has received a flood of likes and positive comments on Facebook following the release of her cartoon ‘Ve Ngoai An Tet” (Going Home for Tet).

Elaborating on the idea of making the Tet cartoon, Chi said that she got married this year and had to stay at her husband’s house, about 180km from her parents’ home, to celebrate the festival due to COVID-19 concerns.

Chi made this film by herself to mitigate homesickness, with the exception of one minor detail, which is the tree that passes the bus in the cartoon.

“As I grew older, I became frustrated with Tet because I had to get up early to cook and clean [my parents’] house,” Chi explained.

“I got married all of a sudden, and it’s hard to go back to that Tet that I thought was boring.

“I can only make my wishes come true through this video.”

Although Chi and her husband live only 180km from her hometown, the COVID-19 pandemic has made the journey home nearly impossible.

“I took everything for granted, and now I’m paying the price,” Chi shared.

“I don’t need to go shopping like I did the day before. I just want to spend the New Year days with my [parents].

“It sounds mundane, but it has now become excessively luxurious this year.”

This is the first time she has been away from home for so long.

Chi is homesick because she can only communicate with her parents over the phone.

Chi wants to challenge herself this year by creating another better and more complicated product.

“This is also the first year I’ve celebrated Tet away from home, which inspired the idea for this video,” Chi stated.

“Tet is an opportunity to bring us many emotions and memories.

“I created a meaningful cartoon to give as a gift to everyone, especially those who are celebrating Tet away from home.”

Chi usually makes videos out of paper, but in this cartoon she used wool and clay.

She encountered various obstacles while creating the characters because wool is a novel material to her.

Because each feature in the video is so small, forming required a great deal of care and patience.

It took her a long time to work out the angles and arrange the outline.

“Due to the COVID-19 pandemic, I can’t celebrate Tet with both my parents and my parents-in-law,” Chi shared.

“This year, only my spouse and I are celebrating Tet together.

“I will send this cartoon to my entire family to watch.

“I hope everyone enjoys it and is moved by the film.”