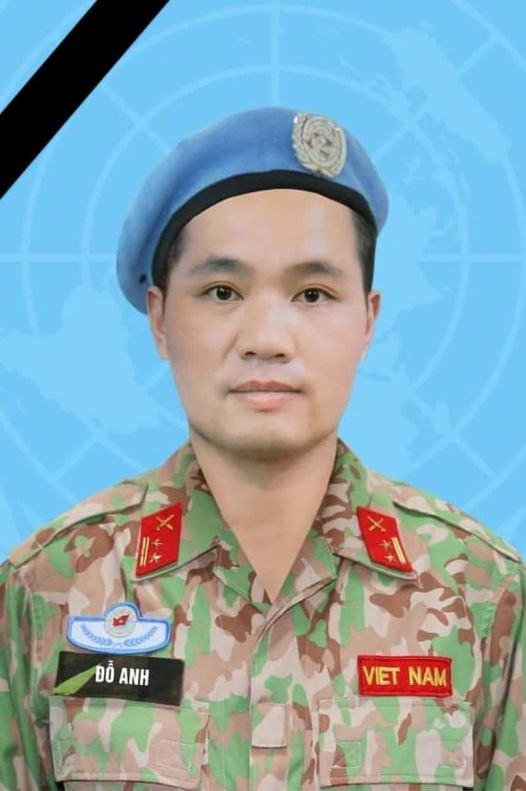 The portrait of the deceased Vietnamese officer, Do Anh, who died during his United Nations peacekeeping mission in the Central African Republic on January 6, 2022. Photo: Vietnam News Agency

Vietnam’s Ministry of National Defense will conduct a memorial service on Wednesday for a Vietnamese officer, Do Anh, who gave up his life during his United Nations (UN) peacekeeping mission in the Central African Republic.

The service will be held at the National Funeral Hall in Hanoi and the deceased officer will be laid to rest at the Nhon martyrs’ cemetery in the capital city’s Bac Tu Liem District on the same day.

Major Anh, an officer of the Vietnam Department of Peacekeeping Operations, was sent to the UN’s Central African Republic mission in 2021 as a military observer.

The Vietnam Department of Peacekeeping Operations held a ceremony on January 15 to receive the deceased officer’s coffin brought back to Vietnam by the UN on a military plane.

The ministry has posthumously promoted Do Anh to the rank of lieutenant colonel and proposed State President Nguyen Xuan Phuc posthumously confer the third-class Fatherland Defense Order on him.

Prime Minister Pham Minh Chinh has also signed a decision recognizing the officer as a martyr and awarding him a ‘The Fatherland Acknowledges the Merit’ certificate.

Vietnam began to take part in UN peacekeeping operations in 2014 with two officers sent to the UN’s South Sudan mission as liaison officers, according to the portal of the Vietnam Department of Peacekeeping Operations.

Three Vietnamese officers have been working at the UN headquarters, General Chien added.