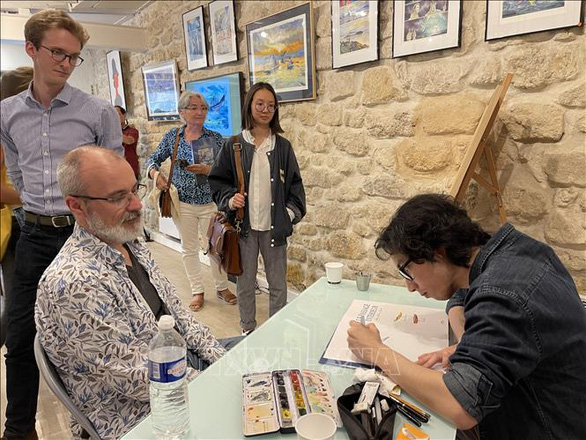 To celebrate the publication of Inside Passage – Essential Journey to Alaska, 25 original paintings from the collection of stories will be on display at the Achetez de l’Art gallery in Paris until June 15.

This is Mai Bach’s first work since graduating from the renowned Delcourt Comic Art School in France.

Monnier Ludovic, the owner of Achetez de l’Art, shared that he saw great potential in Mai Bach in both the art of drawing comics and painting.

“Mai Bach has a keen sense of esthetics. This is what we always seek and want to recommend to the public,” Ludovic said.

This is also the first time a comic work by a young Vietnamese artist has been published in the French comic market, which is one of the world’s largest comic marketplaces in terms of both publication and consumption.

The expedition is based on the actual experiences of the scriptwriter, Lisle.

The nearly-70-page, large-format narrative published by Delcourt Publishing describes the thrilling expedition of four young Frenchmen to the Inside Passage, an Atlantic coastal waterway extending more than 1,500 kilometers from Seattle along the coast of British Columbia to the northern tip of the panhandle of the southeast of Alaska.

The beautiful watercolor pictures by Mai Bach encourage readers to join the Alaska adventure by kayak, appreciate enormous polar bears and whales, explore an environment untouched by humans, and experience the main characters’ emotions, which range from surprise to excitement, disappointment to ecstasy.

The story is not only a representation of man’s smallness in the face of gorgeous and untamed nature, but also of an essential message about the fragility of the earth.

Mai Bach first took an interest in the story after reading the script for Lisle’s adventure.

“The plot of Maxime’s story is within my skill set, so I agreed to assist him in creating the visuals for our debut artwork,” Mai Bach confided.

“This is also an excellent opportunity for me to learn more about the French comic book industry, as it is not always easy to find a suitable story to develop.

Throughout the two years of implementation, Mai Bach encountered numerous obstacles in addition to the advantages.

He acknowledged that he and Lisle were both newcomers to the industry of comic books.

One is a recent art school graduate and the other is a first-time narrative writer; both are struggling to ensure progress and coordinate with stakeholders such as publishers, editors, and other partners involved in production and distribution.

Moreover, this is a true event set in a real location, but Mai Bach was not personally involved; therefore, all drawings are dependent on Lisle’s photographs, videos, and descriptions, making it difficult for the artist to construct a coherent visual and narrative story.

“In exchange, Maxime gave me entire freedom to create the plot in accordance with his suggestions, which made me appreciate our collaboration,” Mai Bach shared.

Lisle said that he liked Mai Bach’s artistic style, making it easy for the two to collaborate on the project.

“Mai Bach has a perfect drawing style that I really like. It’s super realistic, full of dynamism, able to spark the energy of Alaska,” Lisle elaborated.

Along with Japanese manga and American comics, French-Belgian comics are among the top three comic schools in the world.

France is regarded as one of the world’s leading countries for comic book publishing and consumption.

According to French publishing industry data, over 5,000 new comics are released each year to the French and Belgian markets, featuring classic characters such as Tintin, Smurf, Astérix, and Lucky Luke, and are read by readers ranging in age from seven to 77.

Despite the impact of the COVID-19 pandemic, more than 21 million comic books of all genres were sold to the market in 2021, accounting for a quarter of the books published in France that year.