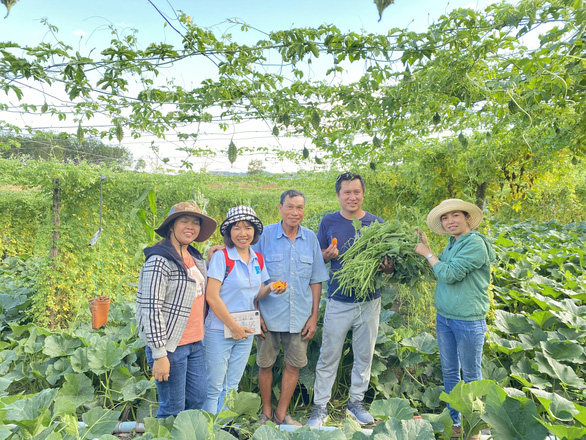 Five years ago, Nguyen Ba Truc, 34, gave up his well-paid managerial position in Ho Chi Minh City to pursue a no-frills agriculture idea that has long been in the back of his mind.

He is among an increasing number of Vietnamese urbanites who are leaving the city to pursue agrarian endeavors in the countryside, as fancy office jobs can no longer provide them with a sense of fulfillment.

Yet, the romanticized idea of countryside life can turn out to be extremely harsh and requires a great deal of resilience from aspirants to make it work.

The few who stick with the endeavor till the end may earn sweet yields, including Truc, whose products of Vietnamese ginseng are selling like hotcakes in the domestic market.

Pining for the wilderness

A person with two bachelor’s degrees in business administration and biotechnology, Truc has a seemingly unrelated but clear vision of his ideal future: a life on the red-soil mountains of Vietnam’s Central Highlands.

Since 2005, when he was still a college student in Ho Chi Minh City, Truc has been using all his savings to travel up to the heights of Lam Dong Province and seek connections with agriculture experts at Da Lat University.

Using his knowledge of his hometown, Kon Tum Province, Vietnam’s capital of herbal medicine, Truc won the trust of the lecturers and students at the university, convincing them to join his project on propagating Vietnamese ginseng using the plant’s tissue, also known as micropropagation.

At that time, Vietnamese ginseng, despite being highly sought after for its medicinal values, was yet to be farmed on a large scale. The majority of the supply had to be sought from the forest, while farmed plants were still grown from seeds and saplings.

Using their first 5,000 micropropagated ginseng sprouts, Truc’s team launched a trial in the highland area of Te Xang Commune in Kon Tum. Their decision was deemed highly risky, as they had almost no precedent model to refer to.

As the trees may take years, even decades, to fully grow, Truc left them to the caring hands of Te Xang locals, while he returned to his education in Ho Chi Minh City.

In 2009, he started working for a food supplier in the city before quickly climbing up the ranks to a managerial position.

Yet, no one including his parents knew that he was still fostering his dream of leaving the city for his hometown, where his ginseng farm awaits.

In early 2016, after years of saving up from his office job in Ho Chi Minh City, Truc decided to take the leap, quitting his job and returning to Kon Tum to pursue full-time agriculture work.

Bringing with him knowledge of the food market in big cities, as well as his research of high-tech agriculture over the years, Truc planned to reach out to grassroots farmers, open a herbal farm, and build a processing plant to launch his products to the masses.

The first time he brought up his plan at a family dinner, Truc was met with shock and disapproval from his parents.

“They invested in their children’s education with the hope of them making their careers and building their lives in the city.

Since 2016, the young venturer has worked with one of his relatives to reach out to farmers in Kon Tum, persuading them to partake in an agriculture model with on-the-spot processing for bitter melon and ginseng products.

The risks in the plan were already measured, but they still managed to take Truc by surprise.

He struggled for months just to persuade locals to grow dang sam, a local ginseng variety that can be found aplenty in the wild.

“I went to each household to talk, but they all laughed at me and closed the door, as they don’t believe that the type of wild plant has a market value,” he recollected.

“By the end of the month, I convinced ten households, but they remained very skeptical.”

Pairing up with the locals, most of whom are Xe Dang minority people, Truc strived to put his understanding of plants and the market into layman’s terms so that his partners could understand them.

He persisted with his plan to build a multilevel production model, which takes 45 days to yield bitter melon and two years to yield dang sam.

With such a clear vision in mind, the young agriculturist still has to put in mountains of work to make it a reality.

One of his biggest challenges is the locals’ farming convention. As they have little to no savings, the farmers are willing to pull the plants prematurely for sale when they feel the need to.

“I tried my best to ask them not to, but they still don’t understand,” Truc said about his frustration at the time.

“They concur with me one day, but go back to the old way the very next day.”

However, as time went by and mutual trust was built, the locals started to alter their farming habits with his direction.

With everything set in motion, Truc opened his own company in 2019, which works with farmers to cover every step from cultivation to processing and distribution of herbal products.

The proven professionalism and effectiveness of the company have convinced many smallholders to come and ask to join Truc’s network.

Now, the company is managing tens of hectares of herbal crops to ensure they uphold clean agriculture guidelines.

With a consistent product output, Truc has also upgraded his processing line to produce specialties of mint quality for the market.

His model has been revered by many Xe Dang farmers as ‘life-changing,’ as it turned wild plants in their backyards into market-ready products.

Truc’s firm now has distribution points in 16 provinces and cities in Vietnam, while his products have shown up on the shelves of many supermarket chains and e-commerce platforms.

However, he indicated that the biggest success of his venture is not the revenue, but the elevation of indigenous plants.

Once a farming discard, herbal plants in Kon Tum have now gained a foothold in the domestic market and help local farmers establish the stable livelihoods that they have always dreamed of.