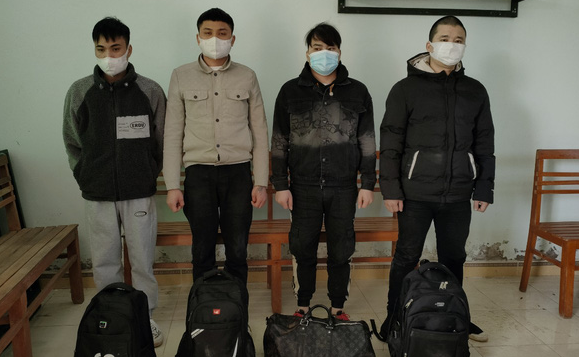 A man has been arrested for organizing for four Chinese nationals to enter Vietnam illegally, the Border Guard Command in the northern Vietnamese province of Lang Son reported on Friday.

Functional forces in Lang Son stopped a car coming to Vietnam from the country’s border area with China in Loc Binh District at around 5:30 am on Thursday.

As the Vietnamese officials inspected the car, they found Nguyen Ha Nam Giang, a 40-year-old resident of Hanoi, was carrying four Chinese nationals — namely Yuan Teng, 31, from the Chinese province of Hubei, Chen Rong Dong, 26, Liang Li Yi, 26, and Huang Wei Wen, 24, all of whom hailed from China’s Guangxi Province.

As the four Chinese failed to show personal papers and related documents to prove the legality of their entry into Vietnam, Giang admitted to making a deal with an unknown person via the Vietnamese chat app Zalo to travel to the border area in Lang Son, pick up the four Chinese and take them to Hanoi.

The Chinese border jumpers then confessed that they wanted to find jobs in Vietnam.

The functional forces are working on paper work to handle the case in accordance with regulations.