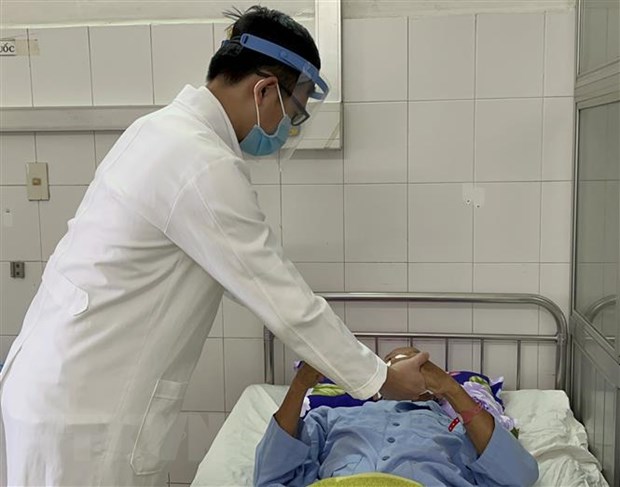 The patient is recovering and receiving special treatment at the Department of Neurosurgery at Can Tho Central General Hospital in Can Tho City, Vietnam. Photo: Vietnam News Agency

Doctors from Vietnam’s Mekong Delta region have recently rescued a 70-year-old depressed patient who hammered a nail into his head.

The patient, who has been reportedly suffering from mental health problems for 12 years, was admitted to the Department of Neurosurgery at Can Tho Central General Hospital in the namesake city with a nail lodged in his skull on Friday last week.

Upon admission, doctors shortly examined and performed emergency surgery on the patient by drilling the location of the foreign object, opening the dura for access to the brain, and stopping the bleeding.

The surgery lasted two hours, removing a nail of four centimeters in length and five millimeters in diameter.

The patient is now recovering without signs of fever and functional limb weakness.

He is under treatment for psychogenic pain at the Department of Neurosurgery at Can Tho Central General Hospital, located in the Mekong Delta region of Vietnam.

The patient had reported sleep disturbance, extreme pain, and restlessness before he physically harmed himself with the nail.

“This is a rare case which posed great danger to the patient and a high possibility of failure since the nail was located close to the venous sinus,” said Chuong Chan Phuoc, head of the Department of Neurosurgery.

It did not damage any important structure of his brain, said Dr. Phuoc.

Having a transorbital penetrating brain injury with a large foreign body remains a serious surgical emergency, which may cause dangerous complications such as limb weakness, dysfunction, brain abscess or even death without prompt treatment.

When it comes to the case, the safest first aid is not to remove the foreign body, but to wind bandages around the wound and quickly transfer the patient to the nearest medical center, according to the doctor.

Regarding the vascular injury, the foreign object acts as a temporary blockage of the break in the vasculature, which may lead to massive bleeding and leave serious psychic complications when removed hastily.

Depressed patients’ families must keep track of their condition, must not leave them alone for too long, and take them to hospitals for regular treatment.

The depressed are prone to self-harming with their life-threatening actions, which requires intensive care from their family members.