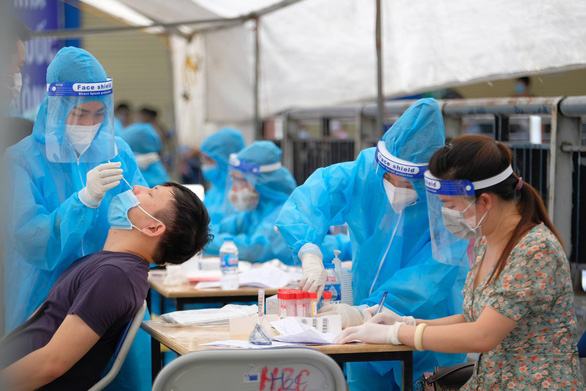 The Vietnamese company whose CEO was arrested for hiking COVID-19 PCR test kit prices has been found having imported rapid test tools from China at a rate 21 times lower than its selling price, the central customs agency reported.

The unit price for the rapid coronavirus test kits imported by Ho Chi Minh City-based Viet A Technology Corporation (Viet A Corp) from China was US$0.955 (some VND21,600) apiece, the General Department of Vietnam Customs reported on January 20.

This price is 21.7 times less than the VND470,000 ($20.75) that the corporation charged the Hai Duong Province’s Center for Disease Control (Hai Duong CDC) last year.

This is among the latest findings in the case against the corporation’s founder and CEO Phan Quoc Viet and the director of the Hai Duong CDC, Pham Duy Tuyen, who were arrested and prosecuted last December for allegedly colluding to inflate the price of COVID-19 PCR test kits and pocket the difference.

They have been charged with “violating regulations on bidding, causing serious consequences.”

In April 2020, the ministry granted a circulation license for Viet A Corp’s one-step RT-PCR test kits, the first-ever made in Vietnam.

The corporation has since provided such kits to many CDCs and medical facilities in 62 provinces and cities and earned a revenue of nearly VND4 trillion ($177.35 million), thereby making an illegitimate profit of over VND500 billion ($22.02 million), investigators said.

Given the increasing demand for COVID-19 test kits amid a serious outbreak that has hammered Vietnam since late April 2021, Viet colluded with the CDC directors of some localities to hike the prices of the tests to illegally make a huge amount of money, according to police documents.

Viet provided the kits for hospitals and CDCs in different localities for use in advance, knowing that pandemic control regulations streamlined the process to choose medical equipment providers.

The CEO then conspired with the buyers to carry out supplier appointment procedures in a manner that artificially inflated test kit rates.

Viet confessed to investigators that he, in conjunction with his company’s partners, hiked the price by 45 percent against the imported rate and that he had paid around VND800 billion ($35.26 million) as ‘commissions’ to such partners, said Lieutenant General To An Xo, spokesman of the Ministry of Public Security.

The Ministry of Public Security has expanded its investigations and has prosecuted a total of 19 defendants for the crimes of “violating regulations on bidding, causing serious consequences,” “giving bribes and taking bribes,” and “abusing positions and powers while performing official duties.”

Police have seized 28 pieces of real estate, blocked bank accounts worth more than VND320 billion ($14.09 million), and temporarily seized over VND4.8 billion ($211,700) voluntarily handed in by the individuals involved.

The Government Inspectorate on Thursday issued a decision to inspect the purchase of medical equipment and supplies, biological products, COVID-19 vaccines and medicines by the Ministry of Health and some of its units.

Earlier on December 31 last year, police indicted Nguyen Minh Tuan, director of the Department of Medical Equipment and Construction under the health ministry, over his alleged involvement in the case.