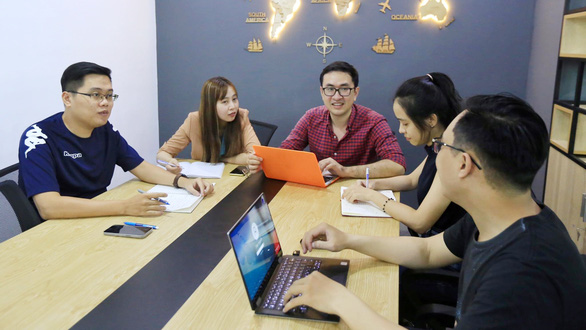 They take copyright very seriously and have experienced tremendous advancement over time.

Since its launch in September 2019, Voiz FM has received a great deal of investment.

The application witnessed a sixfold leap in its growth in 2021 when Vietnam was badly hit by the COVID-19 pandemic.

Currently, browsers can choose from 2,000 audiobook titles on this app.

September 2021 marked the one-million-download milestone for the app both Android and iOS.

Voiz FM is developing an AI voice and has run a pilot test with over 800 participants, 80 percent of whom could not figure out which voice was not human.

“It is commendable to see young people investing in this field of audiobooks as they can see its potential,” said Le Hoang, vice-president of the Vietnam Publishing Association.

“These young entrepreneurs should go professional, take well-planned steps, and overcome initial difficulties so that their efforts can grow substantially in the near future.”

From the sound to the mind

Le Hoang Thach and Lam Huy Vu, chief technology officers of the company that developed the app, would like to emphasize the importance of auditory input in people’s intellectual development.

Audiobooks allow multitasking and facilitate the dissemination of information, according to Thach.

This type of book also breaks the barriers among participants in a book-sharing event, especially among those unconfident in front of a live session.

“We hope that Voiz FM can nurture and connect the community members and help them overcome any physical or psychological hurdles,” said Thach.

“As college students, we always caught the bus to school because we were not residents of Ho Chi Minh City.

“We listened to audiobooks along the way to make the most of our time.”

Because audiobooks at that time were of low quality and there were often chapters missing, Thach set his sights on establishing a provider of a higher quality service, and his dream has come true.

In December 2021, Voiz FM was given a full license for digital publication from the Authority of Publication, Printing, and Distribution.

They are one of the few companies that qualify for such licensing.

Working with the southern office of the Vietnam Publishing Association, Voiz FM ran a book-giving event from July to October 2021.

They offered free books to inhabitants of provinces under the social distancing order meant to prevent the COVID-19 spread last year.

However, the application failed to attract investors at first since audiobooks appeared a rather novel idea, according to Thach.

This was coupled with widespread copyright infringement of published books and a dire limit in resources.

“One of the biggest bugs was the copyright issue,” said Thach.

“Voiz FM is determined to protect the copyright on audiobooks and the rights of authors and publishers.

“Voiz FM has removed more than 50,000 cases of infringing content on YouTube and Spotify since July 2020. However, certain offenders were so clever that we had to call for the authorities’ help.

“Therefore, we are filing an appeal to the Authority of Publication, Printing, and Distribution, asking for support.”

Voiz FM’s developers are partnering with over 20 domestic and international publishers for purchasing the copyright on their books, according to Thach.

They have the intention to expand their scope and create podcasts and sleep-aid materials.

Audiobooks have considerable potential in the Vietnamese market, according to vice-president Hoang.

The reasons, as he stated, include the massive Internet growth and the fast pace of young people’s lives.

“Audiobooks allow them to multitask. They can pick up knowledge while cooking, jogging or driving,” he explained.

“Vietnam was the only country in Southeast Asia with more searches for ebooks than printed tomes in 2019.

“This trend is analogous to that in developed countries like the U.S., the UK, and Germany. So, the audiobook can very likely undergo great growth soon.”

Thanks to the encouragement for digitalization from the Authority of Publication, Printing, and Distribution, digital materials from publishers and issuers have become more available, according to Hoang.

“The audiobook stands out amongst the different digital forms and can boost the development of companies like Voiz FM,” he added.

However, copyright infringement remains as the general public believes sharing books for free equals help for the community, not a legal offense.

This has a considerable negative impact on companies that value copyright.

Audiobooks and printed tomes are not interchangeable because they differ in their nature and context of use, similar to the differences between a book and a book-based movie, according to Thach.

Each customer has their own way of making use of audiobooks.

They might listen before bedtime, while running or cooking, he said.