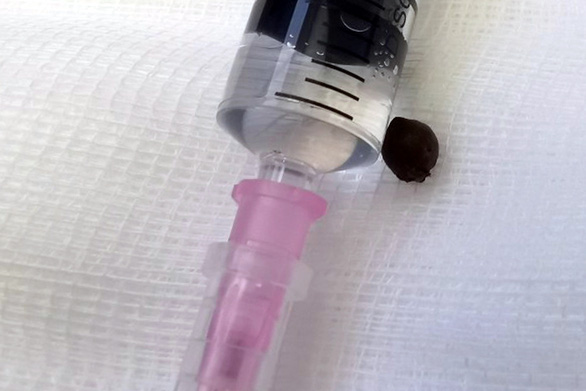 This image shows a grain of pepper removed from the right upper lobe of the lung of a 65-year-old man at a hospital in Dong Nai Province, southern Vietnam. Photo: B.A. / Tuoi Tre

In a very rare case, a Vietnamese man has recovered from severe pneumonia and pulmonary consolidation after doctors removed a pepper grain from the right upper lobe of his lung that had been stuck for seven years.

With CT scan and X-ray images showing that the entire right upper lobe of the patient’s lung was consolidated, doctors thought he was suffering from pulmonary tuberculosis and applied a respective treatment regimen to him.

After a period of treatment without results, doctors suspected that there could be a foreign body stuck in his lungs, so they performed a bronchoscopy on him and discovered a grain of pepper in the right upper lobe.

Dr. Le Quoc Khanh, deputy head of the hospital’s respiratory department, said this was the most difficult and rarest case he had detected from the endoscopic procedures performed on patients.

If such a foreign body is not removed soon, it can cause necrosis of the upper lobe while prolonging serious pneumonia that could lead to a very dangerous drug resistance in treatment.

“A foreign body usually gets through the bronchi and penetrates the middle or lower lobe, not in the upper lobe of the lung as in H.’s case, which caused a lot of difficulties for the endoscopy,” Dr. Khanh said.

“Moreover, the foreign body in this case was not a piece of bone nor was it made of plastic or iron, but was a pepper grain that could not be localized by a CT scan since it was a non-contrasted object,” Dr. Khanh said.

In this case, the patient was anesthetized for more than an hour, during which doctors had to bend the endoscopic tube to reach the location of the pepper grain and then used specialized devices to get it out.

After the removal of the foreign object, H. no longer had a fever or cough, and he could eat normally.

He was later treated for pneumonia successfully and has been discharged in stable conditions, Dr. Khanh said.

H. told doctors that he suddenly choked and then coughed seven years ago but he did not go to see a doctor for an examination.

Recently, he was hospitalized as he could no longer withstand the increasing coughs and difficulty breathing, H. said.

Any patient who chokes while eating and exhibits shortness of breath or cyanosis should be hospitalized for appropriate examination and treatment, Dr. Khanh recommended.

People should avoid laughing and joking while eating to avoid choking on foreign bodies, the doctor advised.