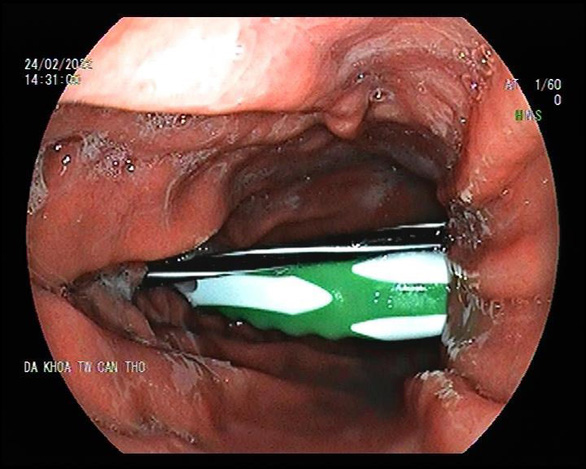 Doctors at the Can Tho Central General Hospital in Vietnam’s Mekong Delta have recently removed a couple of large objects, including a broken toothbrush and a ballpoint pen core, from the stomach of a local man.

The patient, N.K.P., 23, was brought to the hospital on Friday because of his epigastric pains.

The patient was earlier reported to have accidently swallowed a ballpoint pen while working and experienced stomachaches shortly after.

His family later sent him to the hospital for a check.

At the time, his family refused to let him stay at the hospital since the X-ray results did not show any abnormal body inside his stomach.

The patient was then admitted to Can Tho Central General Hospital again for an upper endoscopy as he was believed to have consumed a broken toothbrush.

The sharp tip of the broken brush plugged into his duodenal wall, causing several ulcers.

Doctors decided to conduct an endoscope operation to remove the objects out of his stomach.

Gastrointestinal foreign bodies remain among the most common medical emergencies, with non-sharp objects can get out naturally while sharp objects can cause intestinal perforation and ulceration, according to Nguyen Thi Quynh Mai, head of Endoscopy Department at the infirmary.

Upon spotting any abnormal health symptoms due to gastrointestinal foreign bodies, patients should be quickly brought to medical facilities with modern equipment and receive timely treatment, the doctor emphasized.