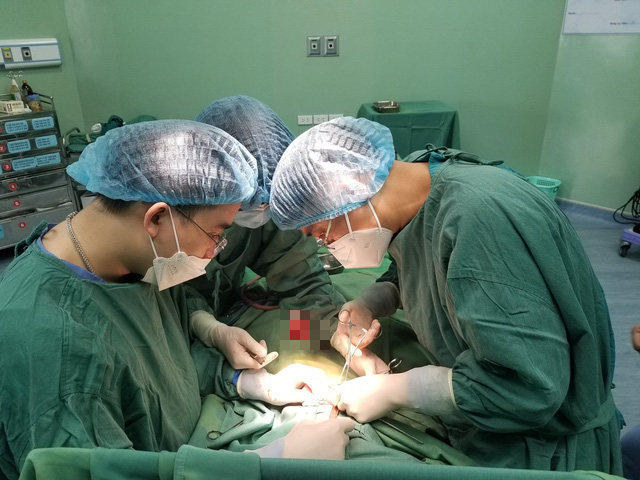 Surgeons perform a surgery to remove 25 magnetic toy balls from the abdomen of a 37-month-old baby boy in Nghe An Province, Vietnam, January 5, 2022. Photo: Nghe An Obstetrics and Pediatrics Hospital

Doctors in Nghe An Province, north-central Vietnam on Wednesday took 25 magnetic toy balls from the abdomen of a 37-month-old baby boy.

N.T.T.’s family brought him to a local hospital over his abdominal pain, fearing he had accidentally swallowed something dangerous.

As his pain worsened, T. was transferred to the Nghe An Obstetrics and Pediatrics Hospital, where doctors used an abdominal X-ray to find out that a group of round foreign bodies forming into a chain had caused intestinal obstruction inside his stomach.

Immediately, surgeons and anesthetists organized a consultation and an emergency surgery on the boy.

During the medical operation, doctors discovered 25 magnetic toy balls stuck together, leading to many duodenal and intestinal perforations.

After nearly three hours, the surgeons successfully removed all of the foreign objects.

Swallowing foreign objects is a common accident in young children, with ingesting magnetic toy balls like T.’s case extremely dangerous as the magnetic balls can cause blockage and pressure on the intestinal wall, leading to ischemia, necrosis and perforations, even septic shock and death, according to doctors.

In this case, doctors recommend that the child be taken to a medical facility quickly for examination and timely treatment.