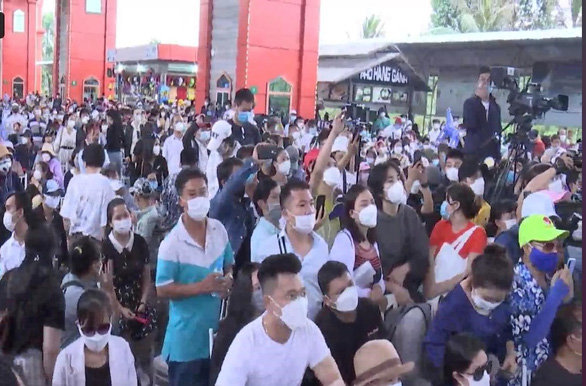 Functional forces in Vietnam’s southern Binh Duong Province are looking into the large gathering of people at a local theme park to watch a live-streamed session held by live-streaming sensation Nguyen Phuong Hang, CEO of the park’s operator, on Sunday.

“We will ask inspectors of the provincial department [of Culture, Sports, and Tourism] to report [on the large gathering], and hold a working session with the operator of the park,” a leader of the department told Tuoi Tre (Youth) newspaper later the same day.

The department sent its inspectors to Dai Nam Wonderland, one of Vietnam’s largest tourism complexes, in Hiep An Ward of Binh Duong’s Thu Dau Mot City when Hang and her husband, Huynh Uy Dung, organized a live-streamed session there on Sunday.

Dung, also known as Dung ‘lo voi,’ is chairman of Dai Nam JSC, which operates Dai Nam Wonderland, while Hang has risen to fame on social media since May following her live-streamed sessions that both drew hundreds of thousands of live viewers and sparked a huge public controversy.

Her live streams featured harsh language against many whom she claimed to be con artists and famous but dishonest entertainers in Vietnam.

Hang has held meet-and-greets to meet and talk to her supporters recently.

Many people, including a large number of uninvited YouTubers, congregated at Sunday’s live-streamed session, which featured a doctor of law and invited YouTubers, despite the danger of COVID-19 spread, according to Tuoi Tre correspondents’ observation.

The provincial cultural and tourism department said that such tourism destinations as Dai Nam Wonderland are allowed to open in the current COVID-19 situation on the condition that they limit guest numbers and comply with healthcare recommendations by the Ministry of Health for pandemic prevention and control.

The department’s inspectors thus closely monitored Sunday’s event as it was taking place.

Vietnam has found 1,026,522 infections since the COVID-19 pandemic first hit it early last year, including 1,021,493 community transmissions in all of its 63 provinces and cities since the fourth wave broke out in late April.

More than 34.6 million people of the 98-million population in the Southeast Asian country have been fully inoculated against the coronavirus, according to the national COVID-19 vaccination portal.

As of Monday, Binh Duong has administered more than four million vaccine doses.

Nearly 1.7 million out of over 2.4 million people in the locality have been fully vaccinated.

The central government has relaxed pandemic control curbs over the past month as transmissions have slowed down, due partly to larger vaccine coverage.

However, the number of infections has appeared to rebound in several locales in recent days.