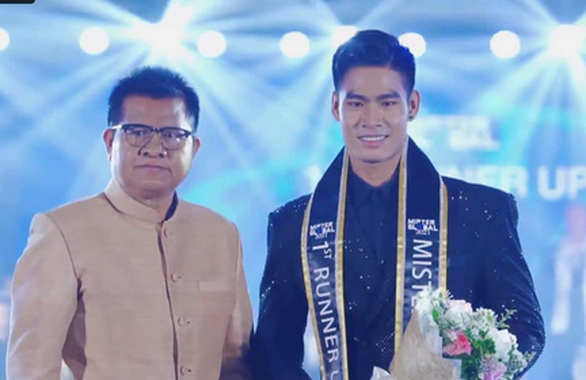 Vietnamese national Danh Chieu Linh was named the first runner-up on Tuesday night at the finale of Mister Global 2022, an annual men’s beauty contest that has been held in Thailand since 2014.

Miguel Angel Lucas of Spain took home the top prize in the competition.

Along with the crown, several other awards were announced, including Mister Global Popularity going to Emmanuel Somto from Nigeria, Best Charming Smile claimed by Juan Carlos da Silva from Venezuela, Mister Global Best Model given to Bagus Ajidani from Indonesia, Mister Global Congeniality granted to Lewis Ellis from the United Kingdom, Mister Global Photogenic for Yaniel Julien Ogando from Cuba, Best National Costume presented to Abhishek Pramuditha from Sri Lanka, and Most Inspirational Video belonging to Tseteej Shiwakoty from India.

Mister Global 2022 is the seventh edition of the competition, which featured candidates from 30 countries and territories worldwide.

It is one of the five largest male beauty pageants in the world.

The participants in this year’s contest competed in several categories, including national costumes, casual outfits, and swimsuits.

Linh is an ethnic Khmer from Bao Lam District in Lam Dong Province.

This was his first pageant and he was very proud to place in the top 30.

His dark complexion and a rustic aura set him apart from the crowd. Many in the modeling industry have high hopes for his career.

Nguyen Van Son was the last representative from Vietnam to strike gold at the competition. He placed first in 2015.