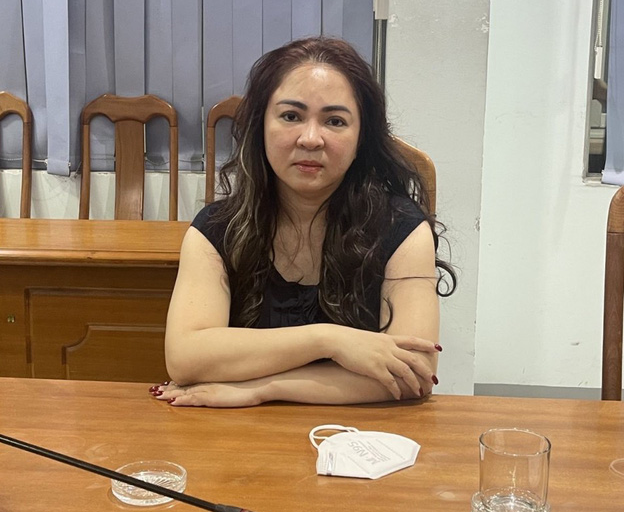 Nguyen Phuong Hang is held at the police station in Ho Chi Minh City, March 24, 2022 in this photo supplied by officers.

Nguyen Phuong Hang, a Vietnamese CEO who became an Internet sensation thanks to her Facebook live-streams, was arrested on Thursday evening for abusing democratic freedoms.

The Ho Chi Minh City Department of Public Security arrested and initiated legal proceedings against Hang, CEO of Dai Nam JSC, for abusing democratic freedoms to infringe upon the interests of the state and the rights and interests of individuals.

The decision was approved by the municipal People’s Procuracy.

Hang had taken advantage of her influence and used social networks to organize many live broadcasts during which she shared unverified information related to other people’s private lives, the municipal Department of Public Security stated in its information portal.

The woman often insulted and slandered other people during her live-streams, it added.

Hang was previously banned from leaving the country from February 16 to April 29 over multiple accusations of slander and insults.

During her Facebook live-streams from March 2021, Hang accused many celebrities of pocketing donations for flood-stricken residents in central Vietnam in 2020.

Officers under the Ministry of Public Security later investigated these allegations and concluded that the artists did not commit fraud or appropriate charitable money.

Multiple celebrities and some journalists also accused Hang of slandering and humiliating other people.