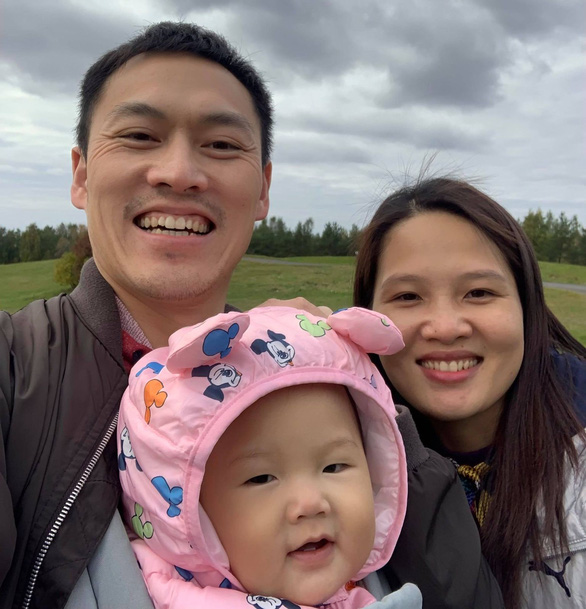 Phan Duy Tung graduated with a bachelor’s degree from a university in his hometown, Nghe An Province, before earning his master’s and PhD degrees in Russia and South Korea, respectively.

The 33-year-old man is doing his postdoctoral research in Finland.

He has published 21 articles and four papers in international scientific journals and conference proceedings on telecommunications.

It took years for Tung to get where he is now.

Tung shared he comes from a farmer family in a poor neighborhood in Thanh Chuong District, where most residents would leave school early and find work to make ends meet.

Until his elder brother’s time, most local kids could not make it to senior high school.

When he was only ten, Tung was sent by his grandparents to a middle school and a high school for the gifted away from home as there were no good schools in their neighborhood.

It was then that the boy began his independent life, when he stayed on his own in a tenanted room.

Self-reliance at such a tender age is a gift. But like everything else in life, it has its cons, according to Tung.

The pluses include having the physical, emotional, mental, and spiritual wherewithal to look after himself, which allows him to take on challenges he would otherwise pass by, he shared.

The minuses, however, are many.

When he was on his own and things went wrong, there was no one around to help him figure out a solution.

He also found it difficult to connect to his loved ones when he needed them most during his teenage years.

Tung recalled a stumbling block in his early adulthood years but the adversity, however, turned into a stepping-stone and marked his turning point in career choice.

The young standout took his entrance exam into a prestigious university in Hanoi but against his family’s expectations, he failed despite getting relatively high marks.

He had to make do with his second choice, the telecommunications program at Vinh University in his hometown.

“I was frustrated at letting my loved ones down and began to question my own abilities,” Tung recalled, adding he planned to retake the exam the following year.

To his surprise, the deeper he got into the new major, the more he got hooked.

The young man was through a bit of a bad patch, but things were gradually picking up.

His school grades and mood both improved.

“Every cloud has a silver lining,” Tung shared.

“As long as we give it our best, when a door closes, another will open.”

The young academic added earning scholarships to study in different countries comes with both rewards and challenges.

His capacity and mentality were put to the test when he was working on a master’s degree in Russia.

“I had one year to study the Russian language, but I only understood 20 to 30 percent of what the professors and classmates said in my first year,” he recollected.

Tung said the method of working out the meaning by key words in contexts that he adopted did help.

The professors taught us by giving explanations slowly and using visual aids.

“The sky was clear at the end,” Tung noted.

His time working on a doctoral degree at the Seoul National University of Science and Technology in South Korea was also a trying one.

On top of language barriers, the pressure to fit into the rigorous learning environment which South Korea is known for was intense.

He found himself in shambles in late 2020, when he was racing against time for his doctoral thesis while his wife, in his hometown then, was expecting their first child.

The novel coronavirus pandemic, which hit South Korea quite hard then, kept him from taking his pregnant wife to his place or returning to his hometown because of the long quarantine mandate.

“I was not there for her when I was most needed,” Tung recalled.

“I kept asking myself if I was doing the right thing.

“I really wanted to hold our baby and be by its side.”

It took his small family almost two years to be reunited.

The predicament taught him a lot and added skill to his repertoire.

Tung, his wife, and their baby are currently in Finland, where he is giving 100 percent effort in his post-doctoral research on designing antennae for new-generation telecoms networks including design of transparent antennae and smart antennae for 5G and 6G wireless applications.

The engineer’s ambition is putting together a research group who can contribute to the growth of the new-generation telecoms networks.

Tung looks out into the field, which is still in its infancy in Vietnam, and sees bright promises.

He hoped his profound research and expertise gained abroad in the burgeoning discipline would help develop his country’s sector.