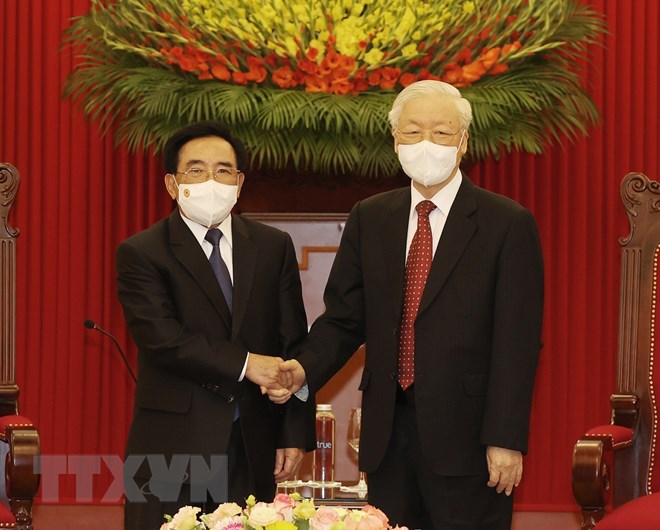 PM Phankham joined talks with General Secretary Trong in Hanoi on Saturday within the framework of his official visit to Vietnam from January 8 to 10, according to the Vietnam News Agency.

The host and guest expressed their delight at the recent strides in the Vietnam – Laos cooperation and affirmed joint efforts to maintain and nurture the ties.

The special relationship between the two countries is a priceless common asset of both Parties and peoples, the leaders stated, adding that it is an important resource for the national development in each country, contributing to regional and global peace, stability, cooperation, and development.

The Lao premier expressed his appreciation for Vietnam’s timely support for his country throughout history, including the aid in the fight against the COVID-19 pandemic.

The Lao Party, state, and people will do their utmost to maintain and nurture the special Laos – Vietnam relationship, he affirmed.

The Party chief praised the mutual assistance in the pandemic response and underlined the importance of the two governments’ coordination mechanism, adding that both sides should further foster political ties in a substantive manner.

The Lao PM had joined talks with his Vietnamese counterpart Pham Minh Chinh earlier the same day, during which the leaders had discussed measures to elevate economic cooperation.