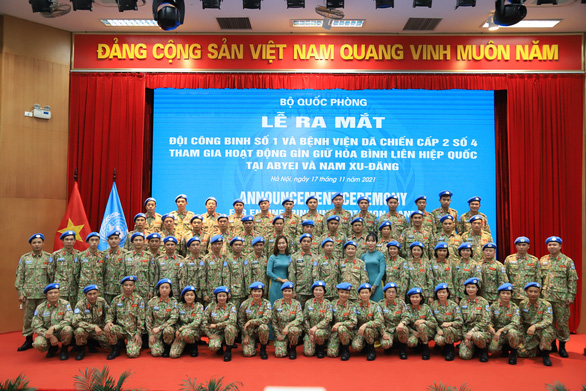 This image shows the debut ceremony of Vietnam’s Sapper Unit No. 1, set up for joining the United Nations’ peacekeeping operations, taking place in Hanoi on November 17, 2021. Photo: T.T. / Tuoi Tre

Vietnam will for the first time send a sapper unit to Abyei, a town between Sudan and South Sudan in Africa, to join the United Nations (UN) Interim Security Force for Abyei (UNISFA) next month, the Vietnam Department of Peacekeeping Operations under the Ministry of National Defense reported.

Nearly 2,000 metric tons of cargo and equipment of Sapper Unit No. 1 will be shipped from the Hai Phong Port to the UNISFA several days to come, said Colonel Mac Duc Trong, the commander of the Vietnamese force at the UNISFA and the head of the unit.

On March 30, the UN officially sent a ship to Hai Phong to receive such equipment, which will be carried to the Sudan port and then transported by road to Khartoum and Kaduqli of Sudan and to UNISFA.

A task group of the unit will be sent to the port and Abyei at the end of April to handle the shipment.

Sapper Unit No. 1, consisting of 184 members, will be sent on a flight conducted by the UN from Hanoi to Sudan, where UN helicopters will carry the force to Abyei, according to the Vietnam News Agency.

It is expected the unit will reach the UNISFA on May 10, before the rainy season begins in Abyei.

The deployment of the unit will mark the first sapper force of Vietnam to join the UN’s peacekeeping operations at the UNISFA.

According to its original plan, the sapper unit had to be present at the UNISFA in March but due to some problems related to vessels and international maritime, their departure has been delayed.

The unit and a field hospital joining UN peacekeeping operations made their debut at a ceremony held by the defense ministry in Hanoi on November 17, 2021.