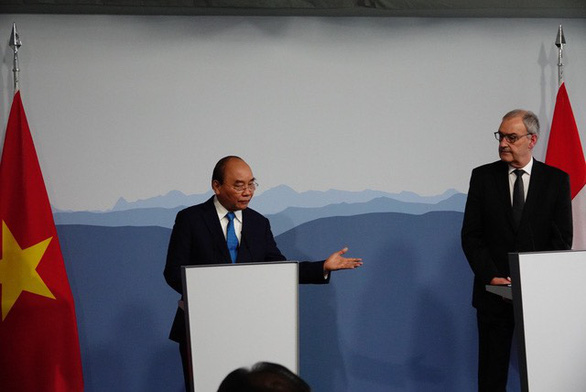 Vietnamese State President Nguyen Xuan Phuc had talks with his Swiss counterpart Guy Parmelin on Friday as part of his ongoing visit to the northern European country to boost the bilateral relationship to a new height.

The meeting took place after an official welcome ceremony conducted in Bern on Friday morning (local time) for the Vietnamese leader, who had arrived for a four-day official visit at the invitation of the host country’s leader.

The two leaders expressed satisfaction that the traditional friendship and cooperation between Vietnam and Switzerland have been growing fruitfully over the last half century in multiple fields including politics, diplomacy, economics, trade, investment and science and technology.

The Vietnamese State and people always treasure the precious support and assistance that Switzerland has given to their struggle for national independence in the past as well as its national development at present.

The two sides had extensive, comprehensive and substantive discussions in all fields of cooperation and reached a consensus on many specific measures to promote the bilateral relations in commensurate with the potential and advantages of the two countries.

President Phuc asked the Swiss government to encourage Swiss enterprises to invest in the Southeast Asian nation, especially in the fields of Switzerland’s strength and Vietnam’s needs, such as finance and banking, insurance, manufacturing industries, and pharmaceutical production.

He assured his host that the Vietnamese government is improving the business and investment climate and create favorable conditions for foreign firms, including those from Switzerland, to do business in Vietnam.

Currently, Switzerland ranks 20th out of 140 countries and territories investing in Vietnam, and the potential for cooperation between the two countries is still very large.

The northern European country is also the sixth largest European investor in Vietnam, with 167 projects with a total registered capital of around US$2 billion.

The two leaders agreed to boost the early conclusion of negotiations on a free trade agreement between Vietnam and the European Free Trade Association (EFTA) to open up new cooperation opportunities.

President Phuc thanked the Swiss government for providing official development assistance (ODA) aid for Vietnam while the Swiss President assessed Vietnam as an effective ODA using partner and said his government will provide Vietnam with 70 million Swiss francs (US$75.8 million) worth of ODA for the 2021-24 period.

As the year 2021 marks the 30th anniversary of the Swiss ODA program in Vietnam, President Phuc sincerely thanked the Swiss government for providing Vietnam with valuable ODA capital that has been used on various fields, helping Vietnam achieve many socio-economic achievements and fulfill many of the United Nations’ Millennium Development Goals ahead of schedule.

The Vietnamese leader also thanked the Swiss government for its donation in medical equipment worth around $5 million for Vietnam’s COVID-19 fight on the occasion of Swiss Vice President Ignazio Casis’s visit to Vietnam in August.

He proposed the two countries promote cooperation in the development, production and distribution of COVID-19 vaccines and drugs.

The host and guest agreed to strengthen cooperation and mutual support at multilateral forums and international organizations such as the United Nations and the Asia – Europe cooperation mechanism.

Vietnam agreed to act as a bridge for Switzerland to promote its relationship with the Association of Southeast Asian Nations (ASEAN), President Phuc said.

He thanked the Swiss government for facilitating Vietnamese communities in Switzerland to integrate into local society, and hoped the host will continue with this in the future.

Regarding the East Vietnam Sea issue, Switzerland emphasized the importance of ensuring freedom of navigation, compliance with international law, and settlement of disputes via peaceful measures based on transparent dialogue and trust building.

As part of his visit to Switzerland, President Phuc on Friday afternoon had a meeting with President of the Swiss National Council Andreas Aebi, at which the two sides agreed to further step up cooperative ties, especially in economy, trade, and investment.