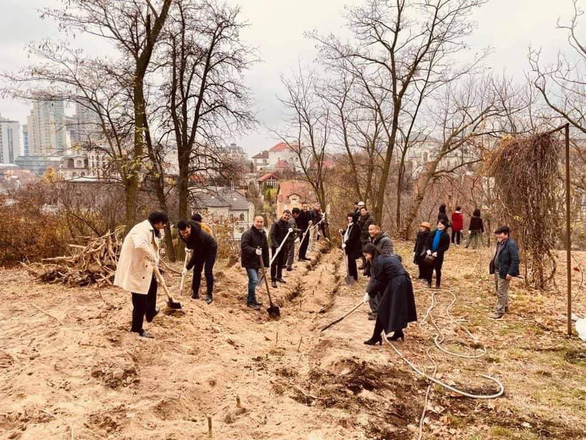 The Vietnamese Embassy in Ukraine has prepared scenarios to protect Vietnamese citizens in the country amid concerns that a war may erupt between Ukraine and Russia, according to Vietnamese Ambassador to Ukraine Nguyen Hong Thach.

Ambassador Thach made the statement during an interview with Tuoi Tre (Youth) newspaper on Monday evening at an ice skating rink in Ukraine and said none of the 200 people present at the rink thought such a war would happen.

However, the embassy has prepared specific plans to protect Vietnamese citizens in the worst-case scenario, the ambassador said.

“In case of a war, the embassy will send Vietnamese citizens from fighting-affected sites to safe areas, or back to Vietnam if requested,” Ambassador Thach said.

“Families of Vietnamese diplomatic officers will also be evacuated to Vietnam.”

Vietnam cannot apply the same method as Western countries in evacuating its citizens from Ukraine, the ambassador said, referring to the fact that many Western countries have been calling on their citizens to leave Ukraine as soon as possible.

There have been obvious tensions along the Russia – Ukraine border areas recently, but no one thinks of a possible war, the diplomat commented.

“Even the Ukrainian government is very much in disagreement with the West about the information that a war may occur as early as tomorrow, as such information has caused unnecessary panic,” Ambassador Thach underlined.

He added the embassy has continuously kept itself updated on the situation of Vietnamese people in Ukraine, where the life of Vietnamese communities still goes on as usual and very few people think of a war.

The probability of a Russia – Ukraine war is only 1 in 1,000 because all parties concerned are trying to find a compromise, and their differences are not so far that they have to be resolved by force, the ambassador said.

The embassy has been in contact with Vietnamese citizens living in Donetsk, very near to the area of Ukrainian separatist forces, and was told they did not think of an evacuation, Thach said, adding that the same thinking has been recorded in vast majorities of Vietnamese who have long lived in other Ukrainian cities like Kiev, Odessa, and Kharkov.

Nguyen Vu Anh, the administrator of the ‘Nguoi Viet Ukraine’ (Vietnamese in Ukraine) Facebook page, said that whether or not a war breaks out between Russia and Ukraine is currently a hot topic on every Vietnamese forum in Ukraine.

“As far as I know, Vietnamese people in Ukraine have not been affected by the current tensions between Ukraine and Russia, as seen through the exchanges in the forums. Every activity is still going on as normal as before those tensions,” Anh said.

Vu Dinh Thieng, a retired worker living in Kharkov, a city in northeast Ukraine, said that the life of local residents is completely calm, without disturbances, except for a bit of anxiety among the Vietnamese community, mainly because of ‘hot news’ from the media.

“We found nothing to worry about. Only a few anxious people bought tickets to fly home,” Thieng said, adding that he did not believe a war would happen.

Both Thieng and Anh said that at the present time, Vietnamese people in Ukraine have not resorted to any help or support from the embassy.