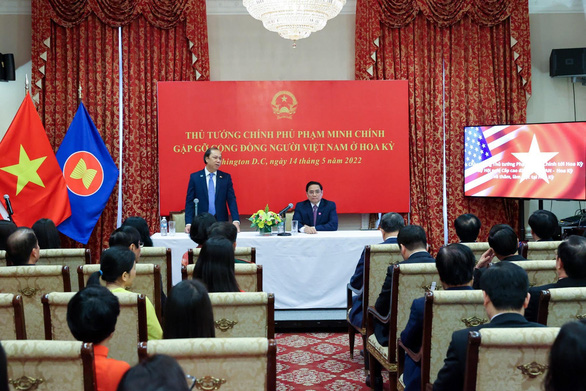 This image shows a meeting between Vietnam’s Prime Minister Pham Minh Chinh and reresentatives of the Vietnamese community on the East Coast of the U.S. on May 14, 2022. Photo: Nhat Bac / Tuoi Tre

Prime Minister Pham Minh Chinh has asked the Vietnamese Embassy in the U.S. to call on the U.S. government to recognize Vietnamese communities in the country as one of its ethnic minorities.

PM Chinh visited the embassy in Washington, D.C. on Saturday as part of his trip to the U.S. to attend the U.S. – ASEAN Special Summit from May 11 to 17, at the invitation of U.S. President Joe Biden.

The PM praised the embassy’s efforts in realizing the external policy of the Party and the state, promoting the image of the nation and people of Vietnam, and contributing to fostering the Vietnam – U.S. comprehensive partnership.

The embassy should maintain its good performance in overseas Vietnamese affairs, including citizen protection, and request the U.S. government to recognize Vietnamese communities in the U.S. as an ethnic minority of the country, the Vietnam Government Portal cited the PM as saying.

He also requested the embassy to take prompt actions in implementing relevant agreements reached by the two countries during this visit.

At a later meeting with representatives of the Vietnamese community on the East Coast of the U.S., the government chief thanked the community for their contributions to the fatherland as well as to the Vietnam – U.S. relationship.

The PM highly appreciated the role of the Vietnamese community on the East Coast as a bridge between Vietnam and the U.S., and their contributions to the implementation of agreements between the two countries.

He acknowledged all ideas and opinions of the community’s representatives and thanked them for their proposals, which he said would be considered throughout by relevant Vietnamese agencies.

The Party and government constantly consider any overseas Vietnamese communities as an indispensable part of the nation, and always try their utmost to support overseas Vietnamese in settling down in the host countries and contributing to Vietnam’s national construction and defense, the PM said.

Vietnamese communities in the U.S. should comply with local laws, preserve and promote the national cultural identity, and continue making active contributions to the development of the Southeast Asian country and the Vietnam – U.S. relationship, for the sake of the two countries and peoples.

Currently, about 5.3 million Vietnamese are living abroad, including 2.2 million people in the U.S., the largest overseas Vietnamese community in the world, according to official figures.