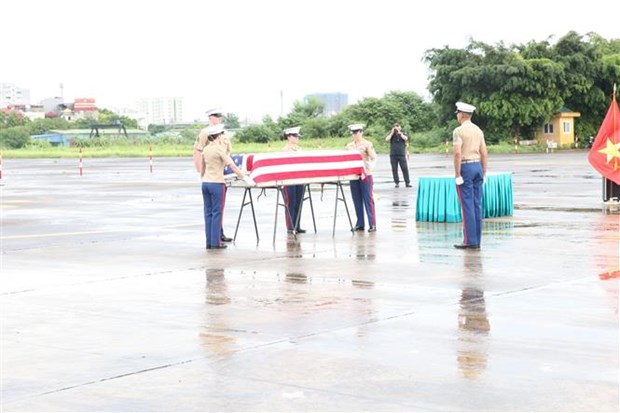 A ceremony was held at Da Nang International Airport on June 30, 2022 to hand over to U.S. agencies the remains of two individuals believed to be American soldiers who died during the war in Vietnam. Photo: Vietnam News Agency

The Vietnam Office for Seeking Missing Persons (VNOSMP) handed over to U.S. agencies two sets of remains believed to belong to American soldiers who died during the war in Vietnam that ended in 1975.

The handover was conducted at a ceremony held at Da Nang International Airport on Thursday, during which the remains were received by representatives of the U.S. MIA (missing-in-action) Office in Hanoi and the U.S. Embassy in Vietnam, according to the Vietnamese Ministry of Foreign Affairs.

The remains were found during the 146th and 147th joint searches by the two countries held from February to June this year, the VNOSMP said.

After examining the remains, Vietnamese and American forensic specialists concluded that they might be associated with U.S. servicemen who were reported as missing in action in Vietnam in wartime, so a decision was made to transport them to Hawaii for further verification.

This was the 158th handover of remains since 1973, two years before the end of the war in Vietnam.

The search for the remains of missing U.S. soldiers from the war has been an ongoing humanitarian activity jointly conducted by the Vietnamese and U.S. governments since 1988.

The issue of MIA and prisoners of war (POW) was a major aspect of the process taken by the two countries to normalize diplomatic relations in 1995, according to the Vietnam News Agency.

POW/MIA-related activities have contributed to alleviating the grief and loss of American families whose loved ones went missing or died in Vietnam.

These activities also demonstrate the Vietnamese people’s spirit of love for peace and reconciliation in leaving the past behind to strengthen the friendship between the two peoples and contribute to the aforementioned normalization of diplomatic ties.

The remains of more than 1,000 Americans have been repatriated to the U.S. from Vietnam since 1973, according to statistics released by the Defense POW/MIA Accounting Agency (DPAA), under the U.S. Department of Defense, in January last year.