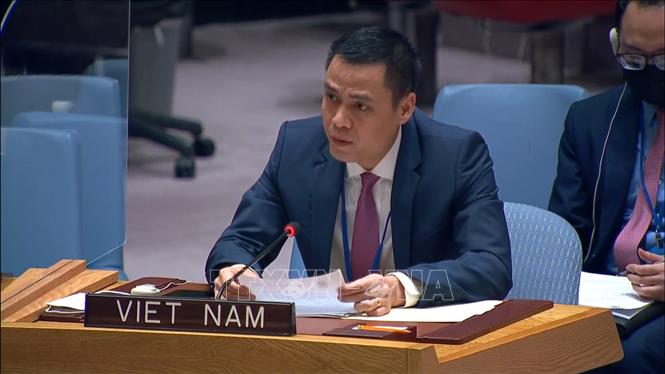 Ambassador and Permanent Representative of Vietnam to the United Nations Dang Hoang Giang is seen in this image. Photo: Vietnam News Agency

Vietnam supports and is willing to take part in the United Nations (UN)’s humanitarian relief for Ukraine within its capacity and conditions, the country’s Ambassador and Permanent Representative to the UN Dang Hoang Giang has affirmed at a meeting.

The ambassador was speaking at the 11th emergency special session of the UN General Assembly held on Wednesday to discuss the humanitarian situation in Ukraine, where the Russia – Ukraine military conflicts have been taking place since February 24, the Vietnam News Agency reported.

The session was attended by Vice President of the UN General Assembly Enrique Manalo and representatives of more than 60 countries and regional organizations.

Ambassador Giang reasserted Vietnam’s consistent stance on solving international disputes by peaceful measures based on international law, the UN Charter, and the principles of respecting the independence, sovereignty, and territorial integrity of other countries, not interfering in their internal affairs, and not using force in international relations.

The current top priorities should be given to a ceasefire, protection of civilians and essential civilian infrastructure, deployment of humanitarian operations, and evacuation of citizens, the diplomat said, sharing the international community’s deep concern about the humanitarian situation caused by the fighting in Ukraine.

This special UN session is slated to continue on Thursday, with another resolution on Ukraine expected to be voted on.