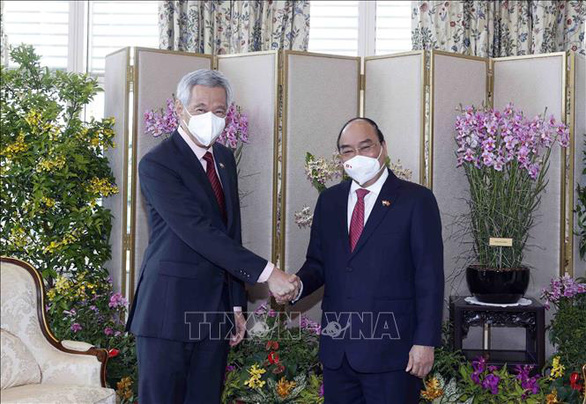 President Phuc and his spouse, along with their entourage, returned to Hanoi on Saturday evening after their three-day visit to the city-state, which Deputy Minister Dung said was extremely fruitful.

It will give an impetus to the Vietnam-Singapore strategic partnership, bring practical benefits to the people and business communities of the two countries, and help build a united and strong ASEAN Community, Dung told Tuoi Tre (Youth) newspaper on Saturday.

They signed five bilateral agreements on innovation, digital transformation, digital economy, green and sustainable development, with a view to “connecting two economies on a digital basis.”

The two countries have agreed to continue their effective coordination in controlling the COVID-19 pandemic, in which they have reached an agreement on mutual recognition of vaccination certificates, facilitating travel and trade between the two peoples.

During President Phuc’s visit, businesses of the two sides signed 29 memoranda of understanding and cooperation contracts worth over US$11 billion.

In the coming time, relevant ministries of the two countries will coordinate the implementation of the signed deals on connecting the two economies on a digital platform, while further boosting the cooperation in other important fields including defense, culture, tourism, and people-to-people exchanges, Deputy Minister Dung said.

All Vietnamese localities will offer favorable conditions for Singaporean investors to realize their investment commitments in order to attract more investment and trade from the city-state.

In meetings with Singaporean leaders, President Phuc suggested that Singapore keep paying attention to and create favorable conditions for Vietnamese citizens to live, work, and study legally in Singapore, the deputy minister stated.

At a meeting with her Vietnamese counterpart on Friday, Singaporean President Halimah Yacob expressed her belief that the visit would raise the Vietnam-Singapore strategic partnership to a new high, according to the Vietnam News Agency.

President Phuc responded that he always wishes to beef up the bilateral strategic partnership.

The leaders were delighted at the rapid and robust development of the bilateral ties, especially after the establishment of the strategic partnership in 2013.

They agreed that the two countries will concentrate on strengthening economic links and pay attention to cooperation in such areas as digital economy, digital transformation, innovation, high-quality human resource development, and sustainable growth.

President Phuc invited Yacob and her spouse to visit Vietnam at an appropriate time, and the host accepted the invitation with pleasure.

He had talks with Prime Minister Lee Hsien Loong on the same day, during which the two sides expressed their delight at the increasingly substantive and effective partnership across all spheres.

Despite the adverse impacts of the COVID-19 pandemic, bilateral trade still reached US$8.3 billion in 2021, up 23.3 percent from a year earlier.

The Vietnam-Singapore Industrial Park (VSIP) model has become a symbol of successful cooperation between the two countries, the two sides agreed.

The two leaders affirmed the importance of maintaining peace, stability, security, safety, and freedom of navigation and overflight in the East Vietnam Sea in line with international law, including the 1982 United Nations Convention on the Law of the Sea (UNCLOS).

The same day saw him and the Vietnamese delegation lay flowers at the President Ho Chi Minh statue at the Asian Civilizations Museum.