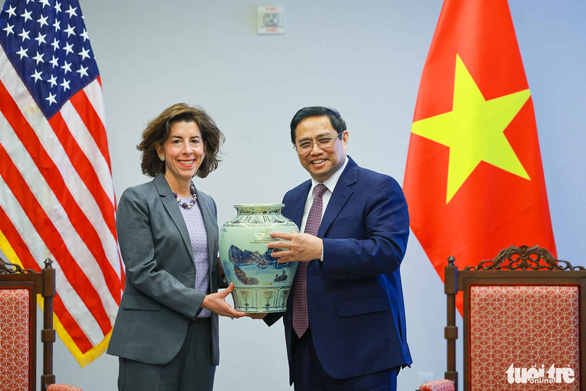 Vietnamese Prime Minister Pham Minh Chinh met with U.S. Secretary of Commerce Gina Raimondo and oversaw the signing of 10 cooperation agreements on Wednesday as part of his weeklong trip to the U.S. and attendance at the ASEAN – U.S. Special Summit.

During the talks, PM Chinh thanked the U.S. Department of Commerce, and Secretary Raimondo in particular, for their support in promoting trade between the two countries and promptly handling issues without disrupting bilateral trade.

Comparatively, bilateral trade sat at just $400 million in 1995 when the two nations normalized their diplomatic relations.

The U.S. continued to be Vietnam’s biggest export market while the Southeast Asian nation became the ninth-largest trading partner for the U.S. last year, according to official statistics.

PM Chinh, whose U.S. visit lasts from May 11 to 17, noted that there is still ample room for growth in trade and commerce between the two countries.

PM Chinh used the meeting to express his hope that bilateral trade relations will developing in a harmonious and sustainable manner, with a focus on diversifying supply chains, digital transformation in commerce and investment, and promoting science and technology.

The country is currently prioritizing projects with new and clean technology, high added and digital transformation value, or those creating links with global production and supply chains, he added.

PM Chinh also expressed his appreciation for the U.S. policy of supporting a strong, independent, and prosperous Vietnam, and added that the visit by Vietnam’s Party General Secretary Nguyen Phu Trong to the U.S. in 2015 laid a solid foundation for bilateral ties.

Expressing her appreciation for Vietnam’s development strides after 27 years of normalization of diplomatic relations, Secretary Raimondo said that she values the Southeast Asian country’s economic development vision and plan, especially in the areas of its digital economy, green economy, and diversification of supply chains.

Raimondo was pleased with the progress in the relations between the two countries, especially in economy and trade.

She also expressed her pleasure to see that more and more Vietnamese enterprises are investing in the U.S..

The U.S. official stated that Washington wants to strengthen cooperation with Hanoi as the latter attempts to realize its commitment toward net-zero emissions by 2050.

Congratulating Vietnam on its successful control of the COVID-19 pandemic, Raimondo affirmed the U.S.’s continued support for pandemic recovery.

Following their talks, PM Chinh and Secretary Raimondo witnessed the signing of 10 cooperative documents between the two countries’ agencies and businesses in various fields including energy, infrastructure, telecommunications, digital technology, climate change response, and those that help Vietnam achieve its commitments made at the 2021 United Nations COP26 climate conference in the UK.

Prominent among the deals is a contract between Vietnam’s HDBank and the International Finance Corporation (IFC) to provide small- and medium-sized enterprises with a supply chain financing facility in agriculture, building materials, supporting industries, downstream petroleum distribution, and climate change response.

This cooperation is expected to help HDBank build a supply chain financing portfolio worth up to $1 billion in the next three years.

Another deal is the cooperation agreement between Vietnam’s Ministry of Natural Resources and Environment and Citigroup on technical support and information exchange to realize Vietnam’s net-zero emissions target through carbon markets, integrated finance, biodiversity, and others.

Among the remainders are the agreement between Vietnam Electricity (EVN) and the GE Group focusing on power generation and transmission, the investment cooperation contract between the Vietnam Posts and Telecommunications Group (VNPT) and Casa System Group in 5G network development, and the Son My LNG Terminal Project in Binh Thuan Province involving the AES Group and PetroVietnam Gas Joint Stock Corporation (PV Gas).