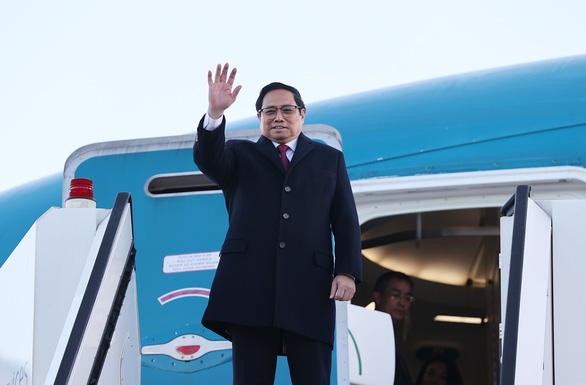 Welcoming PM Chinh at Schiphol International Airport were Dutch Ambassador to Vietnam Kees van Baar, Vietnamese Ambassador to the Netherlands Pham Viet Anh, and Chief of Protocol at the Dutch Ministry of Foreign Affairs Dominique Kuhling, among others.

The visit, which is made at the invitation of Dutch Prime Minister Mark Rutte, aims to further promote the Vietnam-Netherlands comprehensive cooperation ties, particularly in circular economy, renewable energy, and climate change, according to the Vietnam Government Portal.

During his trip, which will last until Tuesday, the Vietnamese government chief will have meetings with Queen of the Netherlands Máxima Zorreguieta Cerruti, his Dutch counterpart Mark Rutte, leaders of the Netherlands’ executive and legislative branches, and mayors of big Dutch cities.

He will also visit a number of big Dutch enterprises, attend the Vietnam-Netherlands business forum, witness the signing of bilateral cooperation deals, visit the Vietnamese Embassy, and meet representatives of the Vietnamese community.

Before arriving in the Netherlands, PM Chinh visited Luxembourg on December 9, as the first destination of his weeklong European tour, during which he will also visit Belgium and attend the ASEAN-EU commemorative summit to be held there on Wednesday to mark the 45th anniversary of ASEAN-EU relations.

Over the past nearly 50 years since their establishment of diplomatic ties in 1973, Vietnam and the Netherlands have seen their cooperative rapport vigorously growing in all fields, including politics, diplomacy, defense and security, trade, investment, agriculture, education and training, and climate change response.

Trade relations between the two nations have been developing constantly, with two-way trade increasing every year and Vietnam always having a trade surplus.

Vietnam’s exports to the Netherlands have strongly risen since 2002, with an average annual growth rate of 15 percent.

The Netherlands is currently one of Vietnam’s largest export markets in Europe, with their trade hitting US$8.37 billion in 2021, up nearly 10 percent from a year earlier.

Over the first nine months of this year, trade turnover reached $8.2 billion, up 36 percent year on year, according to official figures.

By early this year, the Netherlands had had 380 investment projects worth $13.5 billion in Vietnam, making it the largest European investor in Vietnam and ranking eighth among 140 countries and territories investing in the Southeast Asian country, the Vietnamese Ministry of Planning and Investment reported.