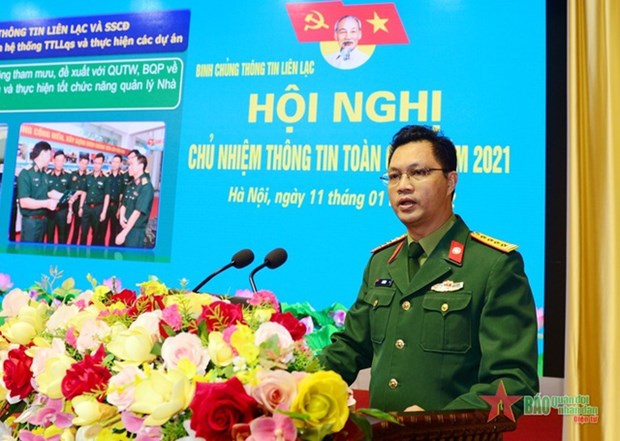 This file photo shows Colonel Le Dung, Deputy Commander and Chief of Staff of the Defense Ministry’s Information and Communications Service, who was appointed Commander of the Cyber Command on January 24, 2022. Photo: VNA

The Cyber Command, under the Vietnamese Ministry of Defense, has a new leader as per a recent decision by Prime Minister Pham Minh Chinh.

Colonel Le Dung, Deputy Commander and Chief of Staff of the ministry’s Information and Communications Service, has been appointed Commander of the Cyber Command, in place of Lieutenant General Dinh The Cuong, as stated in a decision signed by the PM on Monday, the Vietnam News Agency reported.

Since its establishment in August 2017, the Cyber Command has given consultancy to the ministry and the Central Military Commission on strategies, policies and regulations to consolidate and defend the nation’s sovereignty in cyberspace.

It also contributed to the building of the 2018 Law on Cyber Security and related decrees and circulars that provide legal foundations for performing duties related to cyber security and information technologies in the army, and for handling issues arising in cyberspace.

At the same time, the unit has effectively participated in protecting national cyber security and safety, fighting against hi-tech crimes as well as plots and tricks of hostile forces conducted in cyberspace, and safeguarding key national information infrastructure.

In addition, the command has boosted the application of information technologies within the ministry, has proposed building and expanding the infrastructure for the ministry’s military computer system, and developed common use software and specialized software that help improve the ministry’s various activities and its administrative reforms.

On the same day, Standing Deputy PM Pham Binh Minh signed a decision on Lieutenant General Cuong’s resignation from the post of the unit’s commander.