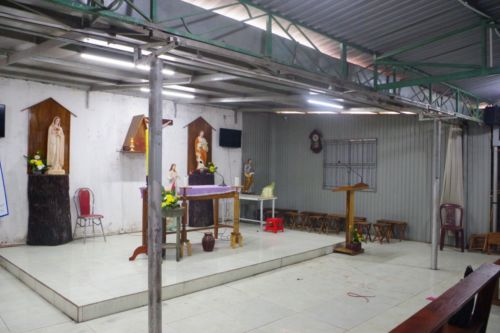 A photo released by police in the Central Highlands province of Kon Tum shows the scene where Vietnamese priest Tran Ngoc Thanh was killed on January 29, 2022.

Police in the Central Highlands province of Kon Tum on Friday said they had issued an arrest warrant and initiated legal proceedings against Nguyen Van Kien, 33, for an investigation into the murder of a Vietnamese priest last week.

Kien, from Saloong Commune in Ngoc Hoi District, was subject to the arrest for allegedly killing priest Tran Ngoc Thanh on January 29.

He arrived at a religious event in Giang Lo 2 Village, Saloong Commune in Kon Tum at around 7:00 pm with a knife around 40cm in length, according to local police.

Priest Thanh was chairing the event at the time.

Kien waited for around 30 minutes for a large group of people there to leave before he attacked the priest.

Around 20 people were still staying at the venue when Kien assaulted the priest.

He then continued to attempt to knife a man who was sitting at a piano at the venue with his knife.

However, the victim used a wooden chair to shield himself and managed to escape.

People put Kien the attacker under control and rushed the priest to the hospital but he could not make it.

Informed of the knifing, local authorities examined the scene as well as took testimonies from witnesses, before initiating legal proceedings against the suspect.