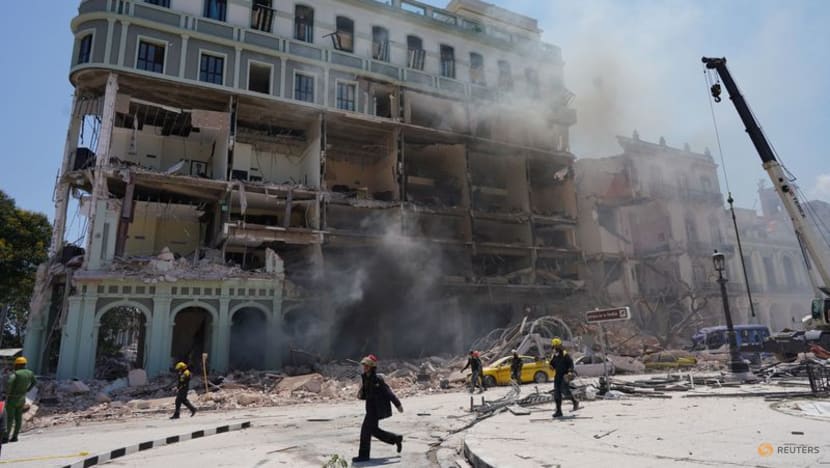 Members of the emergecy services walk near the Hotel Saratoga after an explosion in the building, in Havana, Cuba May 6, 2022. Photo: Reuters

Party chief Trong and State President Phuc extended their corresponding condolences to Miguel Diaz-Canel, First Secretary of the Central Committee of the Cuban Communist Party and President of the Republic of Cuba on Saturday.

Vietnamese Minister of Foreign Affairs Bui Thanh Son also sent a message to his Cuban counterpart Bruno Rodriguez Parrilla to condole over the deadly explosion that happened at the well-known 96-room Hotel Saratoga in the Cuban capital of Havana on Friday.

According to preliminary data, a pregnant woman and a child were among those who died in the blast, the Cuban Presidential Office said.

The office also announced that 64 people have been hospitalized for injuries, including 14 minors.

Meanwhile, Dr. Julio Guerra Izquierdo, chief of hospital services at the Cuban Ministry of Health, was cited by Tribune as announcing that at least 74 people had been injured in the incident.

The explosion was “not a bomb nor an attack, it’s a regrettable accident,” CNN cited Cuban President President Miguel Diaz-Canel as saying after he visited the explosion site on Friday.

“Everything indicates that the explosion was caused by an accident,” the Cuban Presidential Office said in a tweet.

A gas leak is deemed as the cause of the explosion, the office said, adding that more details would follow.

The powerful explosion also rattled a nearby school with more than 300 students in attendance, killing one student and injuring 15 others, the Cuban Health Ministry stated.

As shown in initial reports, no foreigners were killed or injured in the blast, Cuban Tourism Minister Juan Carlos Garcia said.

This neo-classical-style hotel was remodeled by a British company after the fall of the Soviet Union and was considered the place to go for visiting government officials and celebrities for many years, according to The Guardian.

The hotel had been closed to tourists but was slated for a post-pandemic reopening in four days’ time, as stated on its Facebook page.

At the time of the explosion, workers were inside the hotel making final preparations for reopening it, said Roberto Enrique Calzadilla, a representative of the military-run company that operates many of the country’s hotels.