Vietnam needs to build its own defense capability: former acting US defense secretary 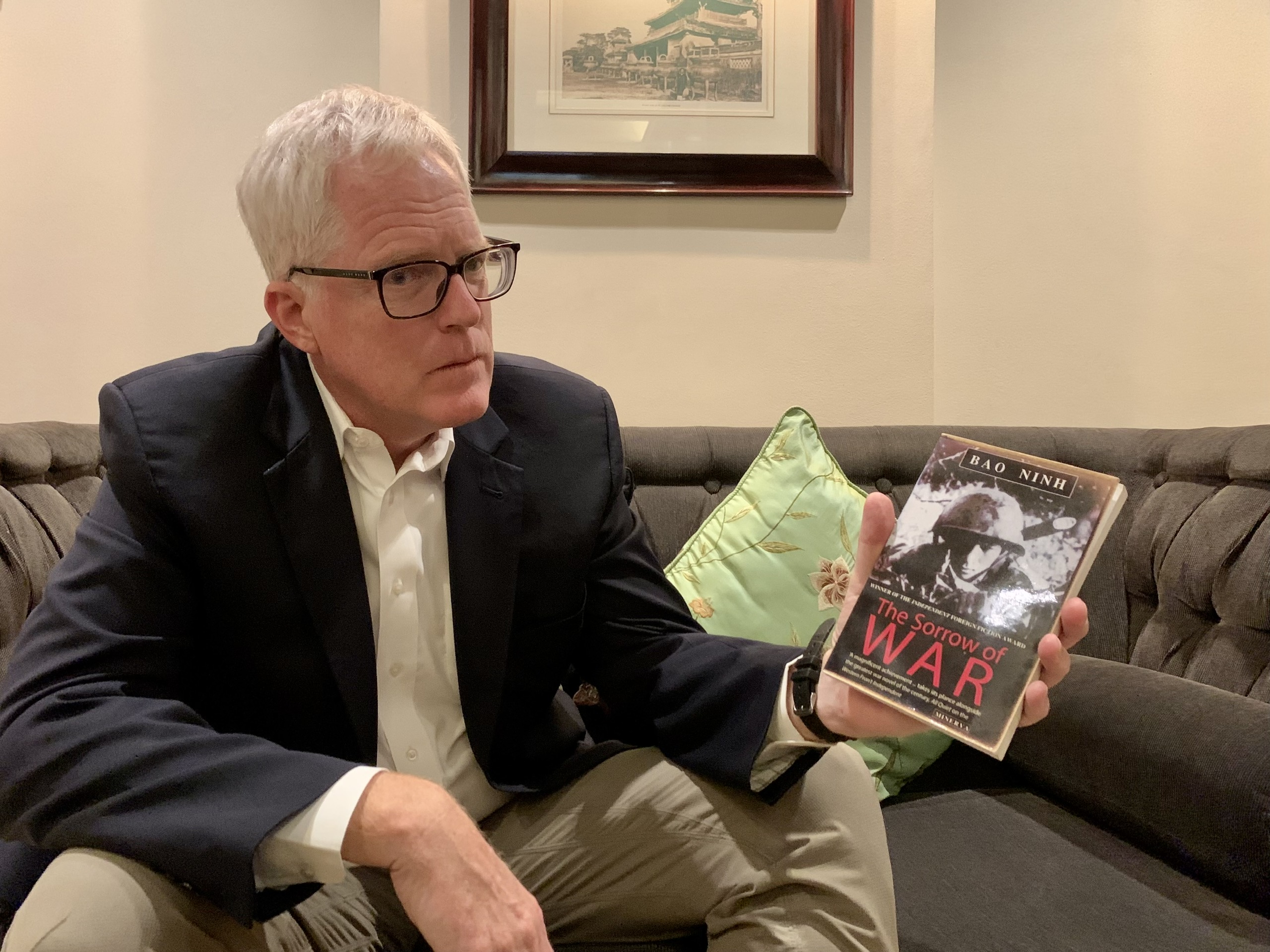 On the sidelines of the Vietnam International Defense Exhibition 2022 held in Hanoi on December 8 – 10, former acting U.S. Secretary of Defense Christopher Miller had an interview with Tuoi Tre News to discuss national security and defense technology issues of the Southeast Asian country.

In your opinion, how can developing countries, such as Vietnam, ensure national security without spending too much money on weapons procurement and development?

That is a wonderful question. And what has set Vietnam apart from the rest of the world is the spirit in the heart of the people and its military. It’s not technology that matters, it’s how you use it. I think Vietnam has shown for 1,000 years that it’s able to adapt and use technology, but not become a prisoner or devoted to technology. Because Vietnam understands that they are only tools in the heart and the brain fight.

There is a fact, a fact that worries me a bit, that now many people only focus on the smartphone screen to analyze what technology the weapon carries but forget about how to use them and how reliable they are. When things are chaotic, when things start breaking, you want to have very rough, durable things that you can rely on.

So, in the current world context, do you think military or diplomacy is more important in preventing chaotic situations from happening, such as armed conflict?

Diplomacy should always be the preferred solution to working out differences and conflict instead of fighting. Both Vietnam and the U.S. understand better than anyone what the consequences of war are. We have gone through the war together, have experienced the loss and we understand the importance of dialogue to build trust and resolve differences.

I had just bought the English version of “The Sorrow of War” in Hanoi before I met you. This is the best war novel I’ve ever read and it’s like coming out of the war.

War causes many tragedies. But that does not mean that we avoid building a strong army. Having a strong army is a way to deter foreign forces from aggression and provocation or doing anything harmful to the country. When we are strong, no one will dare to attack or bully you into accepting tyrants.

How do you evaluate the current defense capacity of Vietnam? Is it strong enough to deal with new challenges in the region and the world?

Vietnam now resembles Israel in the 1970s. The Jewish country then just won after some wars to protect its independence, with the help of weapons and equipment from other countries. After those wars, the Israelis realized that they needed to develop their own military industry and capability to strengthen their internal forces. And they did it in the 1970s, 1980s and 1990s. The first products of the Israeli defense industry served only their own needs. But now, Israel has produced a series of high-class military equipment and exported it around the world.

Personally, I think Vietnam today is very similar to Israel in that it is willing to produce more domestic weapons to strengthen its defense capacity. The Vietnamese are hardworking, smart and have learned many lessons from history, that they must be self-sufficient to protect the country from foreign invaders. Vietnam is facing a perfect time to promote the domestic defense industry. My prediction is that, in a few years, Vietnam will be able to export defense products to the rest of the world.

Where will America be in that process?

That’s why I came here to learn more about everything that’s going on in Vietnam, to find ways to have a closer partnership between our governments and our industries and our companies. I think they’re enormous. What I’ve learned from being here is that there’s enormous opportunity and potential. I think we’re at the very beginning of the recognition that we all must work together more.

That requires not only time but also mutual trust and more dialogue. The world is increasingly complex, and Vietnam understands that stronger than any other countries in the region because it is so close to so many different challenges. Countries are in what I call a “transition” process in terms of how they see the world.

The U.S. and Vietnam both have a strong sense that sovereignty is very important. Defense and strength are important. Diplomacy, information economics are important, too. I think as we go forward, and we work closer together, we can be much more effective. Once trust has been built, technology transfer and partnership become a lot easier.

In 2016, during a visit to Vietnam, President Barack Obama announced a decision to lift the ban on exporting lethal weapons to Vietnam. How has it been since then?

I think it’s going all right, not great but not bad. It’s right in the middle right now. The relationship between the two sides is now like an open book. That means what happens in the future will be written by us today.

Personally, I think there will be no limit to the U.S. providing or sharing something but as I said above, the U.S. and Vietnam need to talk more. If you haven’t forgotten, in 1945, the first American military officers came to Vietnam to cooperate with Ho Chi Minh’s Viet Minh forces. They played a part in training and providing equipment for the Viet Minh, who later won the August uprising of the same year. If those Americans could see how Vietnam is developing today, they would be very proud of having played a small part in it. I think just like the sky, there will be no limit to how far America and Vietnam can go. The U.S. is interested and wants to go further in relations with Vietnam.

The most important thing is still what capabilities Vietnam wants to have, what equipment is needed for its strategy and plans in the future, not just buying a bunch of equipment. That question needs to be part of an overarching strategy, which is I think, as we continue to learn and talk, we’ll be able to understand better.

The U.S. has confirmed that it will provide 12 T-6 aircraft to Vietnam. Does that open the door to further equipment provision from the U.S.?

Now I have no information on the possibility of delivering anything more than the T-6 in the future. With the Textron-built T-6, it’s a durable, reliable aircraft that’s ideal for a variety of missions. It has variants that can carry enormous amounts of weaponry, and sensors for reconnaissance and surveillance and intelligence collection. The aircraft can go over the sea, it can fly anywhere it needs to. Textron does not pay me to say these things and I do not represent them. My observations are from what I experienced when I was in the army and special operations. I was very much involved in the United States military decision to buy the T-6 to provide support to our special operations forces.

T-6 is a good but reasonably priced plane and is exactly what Vietnam needs. I’m certain that someone else would be happy to sell Vietnam fighter jets for up to US$125 million each. However, that does not have the same capabilities as a plane like the Textron plane.

Given the fact that some countries are traditional weaponry suppliers of Vietnam, what are the pros and cons for Vietnam in buying equipment from the U.S.?

Personally, I think Vietnam should produce its own weapons and capabilities, so that you’re not relying on anyone. Because the way that you can provide the best security to your people is not relying on anyone else. I don’t think any country should tell another country what to do. So that’s a decision that Vietnam needs to make, how it wants to handle their foreign policy and their relations. I think there are examples in Asian countries that are experiencing the same threatening behavior by other hostile or potentially hostile elements.

I don’t want to tell Vietnam what to do. But the one thing about Vietnam is that it wants to protect its people and its interests. Vietnam knows what the right answer is, and I just want to highlight that the US is eager to support in any way that Vietnam wants.

Thank you for the discussion!

Some export versions have armament attachment points on the wings that allow the T-6 to act as a light attack. Currently, more than a dozen countries are using T-6 aircraft, most of which are T-6A versions.

The U.S. confirmed that it is assisting Vietnam in modernizing its military pilot training program and training technicians for maintenance tasks.

In 2019, Lieutenant Dang Duc Toai was the first Vietnamese pilot to graduate from a training course on a T-6 aircraft within the framework of the U.S. Air Force’s Aviation Leadership Program.

Speaking to Tuoi Tre News about the pilot training program and supplying T-6 aircraft to Vietnam on December 13, an officer representing the U.S. Air Force in the Pacific said the U.S. intends to pay for all 12 T-6 trainer aircraft.

The total cost of this program is over $250 million. This includes the costs of the initial pilot training and maintenance support.

The U.S. government is providing this program to Vietnam with 100 percent grant aid funding, meaning Vietnam does not have the obligation to repay.

The number of pilots will be sufficient for operating the 12 aircraft. The pilot training is ongoing and follows an identical rigorous training pipeline as a U.S. military pilot would.

Once complete, these pilots can safely operate these advanced aircraft and instruct new pilots to do the same.

“Our top priority is to enhance Vietnam’s capability and to nurture a partnership with common interests”, the officer said.

Christopher Miller served as the Acting Secretary of Defense, from November 9, 2020 to January 20, 2021.

Earlier in 2020, he was the Director of the National Counterterrorism Center and performed the duties of the Assistant Secretary of Defense (ASD) for Special Operations/Low Intensity Conflict.

He previously served as the Deputy Assistant Secretary of Defense (DASD) for Special Operations and Combating Terrorism (SOCT).