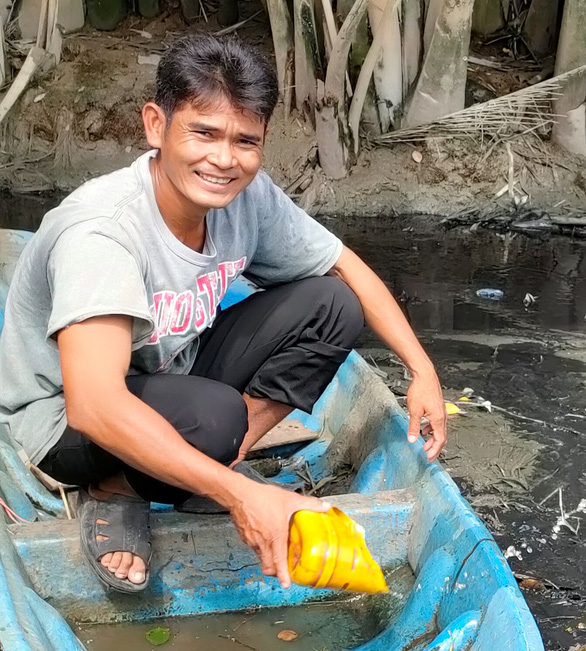 Thach Sanh is pictured on his sampan on one of his fishing trips in Ho Chi Minh City, Vietnam, during which he is willing to risk his own life for others. Photo: Son Binh / Tuoi Tre

Thach Sanh loves the ordinary but he has put in extraordinary efforts to make sure everyone around him is safe and happy.

The 40-year-old, who left his hometown in the Mekong Delta province of Soc Trang along with his family for Ho Chi Minh City years ago, was named after a good-natured, intrepid protagonist from the namesake folk tale.

Sanh runs different kinds of errands around Tan Kien Commune in the outlying district of Binh Chanh but gets by mostly by shouldering cargoes at a porterage facility and catching fish from the rivers nearby.

When he is not at the facility, he reaches out to those who might need his help.

He recently risked his own well-being to save the life of a distressed woman who attempted suicide and retrieve her young child’s body.

Sanh still remembers clearly how he rescued the woman, who jumped off Binh Dien Bridge in Binh Chanh District, with her toddler on November 4.

When the man was casting his fishing net around nine o’clock that morning, he heard something flop down behind him into the fast currents.

“At first, I thought someone was dumping their garbage and didn’t realize what was really going on until I noticed some passers-by on the bridge signaling to me for the rescue,” Sanh recalled.

He quickly steered his sampan around and pinpointed where the woman had fallen.

Spotting the woman struggling in the fierce currents, Sanh bravely jumped off his sampan and grabbed her tight.

As his boat shook violently and almost sank while he was trying to reach the victim, he could not pull her aboard and thus summoned all his strength to swim against the strong currents with one arm, with the other holding her head above the water.

Sanh was on the point of collapse when a man from a passing barge pitched in and helped haul the woman to safety.

Drenched to the bone and exhausted, Sanh performed first-aid procedures on the woman, who could sit up on her own after a while.

Relieved the woman was now safe and sound, his heart broke for her as her one-year-old child, who had also fallen into the water, was feared dead.

Rescuers swiftly arrived at the scene but failed to retrieve the child’s body.

Two days later, the woman’s family went to see Sanh at his tenanted home, pleading with him to bring back the body of the child, whose life was taken too prematurely.

Unsure what to do when they asked him for help while divers had failed to retrieve the child’s remains, Sanh willingly spent half a working day doing the family another favor.

“By sheer destiny, I found the child a few kilometers from the scene just a while into the search,” he said.

Born and raised in a rural area in Soc Trang Province in the Mekong Delta, Sanh dropped out of high school and did all kinds of odd jobs to help support his parents and two younger siblings.

After being discharged from compulsory military service in 2005, he followed his family to Ho Chi Minh City, where he later settled down with his wife and two children.

As his heart always goes out to others, he often shares his fish catch with fellow tenants, most of whom are also internal migrant workers.

He makes sure the corpses stay secure at the accident sites, waiting for police officers to arrive.

Sanh said that despite being scared of spotting human remains while going fishing at late hours, he never walks away from them.

“Despite my humble education, I understand human life really matters, their passing and bodies must be respected,” he said.

Sanh is also someone for his neighbors and even strangers to turn to for help.

According to his neighbors, in his latest good deed, the kind-hearted man helped push a passer-by’s motorbike to a filling station and even gave them VND50,000 (US$2.2) as they did not have any money left for fuel.

“It’s not really my name that inspires me to do good deeds. We have to do the right thing whatever the situation is,” Sanh said with a smile.

According to Huynh Van Thi, the people-elected head of a hamlet in Tan Kien Commune, Sanh and his wife, a factory worker, have worked hard to provide for their children over the past few years.

“Many of his neighbors and local authorities really appreciate Sanh for his honesty and willingness to reach out to those in need,” Thi said.