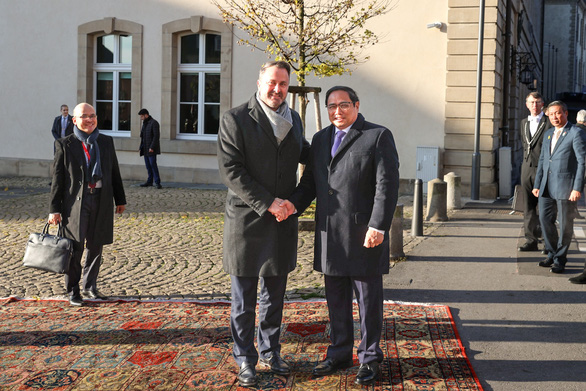 The leaders of Vietnam and Luxembourg have agreed to promptly set up a strategic partnership framework on green finance, which will support Vietnam to realize its national green growth strategy, among other cooperation between the two countries.

The agreement was reached during the talks held on Friday between Luxembourg Prime Minister Xavier Bettel and his Vietnamese counterpart Pham Minh Chinh, who arrived at Findel Airport on Friday for an official visit at the invitation of PM Bettel.

The two PMs pledged to establish a strategic partnership framework for green finance to enable Luxembourg, with its strength in investment capital, especially green finance, to help Vietnam accomplish the national green growth strategy for the 2021-30 period, with a vision to 2050.

Such green growth will help Vietnam effectively respond to climate change and fulfill its commitment on achieving net-zero emissions by 2050, as announced by PM Chinh at the 26th United Nations Climate Change Conference of Parties (COP 26) in 2021.

PM Chinh suggested Luxembourg provide Vietnam with financial and technological assistance for the renewable energy industry and climate change adaptation projects, especially in the southern Mekong Delta region, which is the largest rice hub of the Southeast Asian country.

He encouraged Luxembourg enterprises to boost investment in renewable energy, digital transformation, strategic infrastructure, and pharmacy in Vietnam, while calling on the European country to facilitate the entry of Vietnamese goods, especially agro-forestry and fishery products, into Luxembourg and other EU member countries.

He also affirmed his assistance for the EU to soon ratify the EVIPA, and pledged support for Vietnam in the areas of circular economy, banking, securities, climate and especially green finance.

Both the host and guest agreed to fully implement the EU-Vietnam free trade agreement (EVFTA), sign a bilateral double taxation avoidance agreement, and step up a bonded warehouse system in each country in order to promote bilateral trade as well as facilitate EU – ASEAN trade exchanges.

PM Bettel supported the increase of scholarships for Vietnamese students to pursue study in Luxembourg, establishment of a mechanism for close cooperation in education, and creation of a link between small- and medium-sized enterprises, particularly start-ups, of the two countries.

He also highly valued Vietnamese communities in Luxembourg for their role in the host country’s society.

The Vietnamese leader asked the Luxembourg Government to continue to support the Vietnamese community to contribute to its socio-economic development, as well as receive more Vietnamese workers to the country.

The two sides also discussed regional and international issues of mutual concern, and affirmed their mutual support at multilateral and international forums such as ASEAN-EU, ASEM, the United Nations (UN), and the UN Human Rights Council, the Vietnam Government Portal (VGP) reported.

They reiterated the importance of ensuring peace, stability, security, safety and freedom of navigation and overflight in the East Vietnam Sea, refraining from the use of or threat to use force, settling disputes by peaceful means in line with international law, especially the 1982 UN Convention on the Law of the Sea (UNCLOS).

The Vietnamese government chief invited PM Xavier Bettel to visit Vietnam in 2023 as both countries are looking forward to celebrating the 50-year anniversary of their diplomatic ties.

As part of his trip, PM Chinh delivered a speech at the Vietnam – Luxembourg Business Forum on Friday afternoon after paying a visit to the Luxembourg Stock Exchange.

He also had talks with a number of leaders of Luxembourg businesses and met with representatives of the local Vietnamese communities.

Luxembourg, one of the EU countries that soon ratified the EVIPA, is the EU’s third largest investor in Vietnam with a total investment capital of $2.6 billion.

The European country has so far provided official development assistance (ODA) worth 129 million euros ($136.5 million) to Vietnam, one of its priority countries in such aid.